Herbert F. Wass of Topsfield, and Oak Bluffs, died on Oct. 24, 2022, at his Campground cottage on West Clinton Avenue on a rainy Monday, surrounded by his wife of 65 years, Dorothy (Teal) Wass, and daughters Margaret (“Peggy”) Sturdivant and Gretchen Rehak. Just minutes before death, they sang an MVCMA Community Sing classic, “Sing Your Way Home,” the last song of the night at Tabernacle summer evenings for over 100 years. 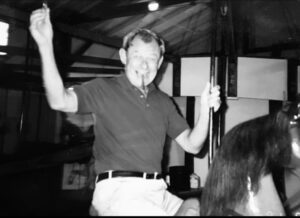 Despite health challenges dating back to a stroke in 2011, Herb lived fully into his 90th year. Herb was an economist, and vice president of the Federal Reserve Bank of Boston for over 28 years, as well as an adjunct professor at Babson College. He was born in Fort Wayne, Ind., and educated at Earlham College in Richmond, Ind., where he met his wife of 65 years, Dorothy Erskine (Teal). As the stories were told, the young Dorothy had many admirers, but Herb was the funniest man she’d ever met, and she agreed to go to the sock hop with him. They celebrated their 65th wedding anniversary on August 31 with a dinner at L’Etoile in Edgartown, where Herb found it ironic that the five-star chef and owner, Michael Brisson, was also the cheerful driver for Meals on Wheels for M.V. Elder Services.

Always industrious, he worked several jobs while in college, at a pizza shop, a funeral home (perfect for slightly used bouquets for Dorothy), and as a sportswriter and stringer for the Richmond Palladium Item. He also worked the grounds crew for the Fort Wayne Daisies, the first women’s major league baseball team established in 1945, writing up the games for local papers after maintaining the fields. Though small in stature, he had a large presence, and was a wily athlete; he was known as “Dirty Herb” on his basketball team because of his elbows under the basket jabbing much taller players, and for his prowess on the racquetball court. He received his master’s from the University of Chicago, and did graduate work at the London School of Economics during a summer overseas.

Herb went on to teach at City College of New York and the University of Vermont, and then moved to an executive position at the Federal Reserve Bank of Boston. They settled in Topsfield, because the small New England town reminded snow-loving Dorothy of Vermont in 1968. He rose to the position of vice president and secretary to the Federal Reserve Board before his retirement in 1995. He was a classic Columbo, driving his Chevy Chevette (called the Cigar-Mobile), and wearing a wrinkled beige raincoat and inexpensive suits amid the well-heeled Bostonian movers and shakers. A gifted orator, it was never expected when the short man with the outdated tie took to the podium, speaking extemporaneously, with great humor, about economic policy.

Herb and Dorothy raised their two daughters, Peggy (Sturdivant) and Gretchen (Rehak), in Topsfield, where they were active in town government. Herb served on the Topsfield finance committee, the trusts fund committee, and was roped into volunteering with Dorothy for the League of Women Voters and establishing the town’s first recycling committee in 1972. They were first introduced to Martha’s Vineyard in 1962 by a colleague from Ohio, artist William Blakesely, who owned the Blakesley Gallery at the end of Circuit Avenue in the 1960s and ’70s, and later had a studio in Montgomery Square. As Midwestern folks, they had never heard of the Vineyard, and certainly couldn’t afford to travel there. They served as assistant house parents at the West Tisbury Youth Hostel for a rainy week, chaperoning the young cyclists, and fell in love with the Island. They purchased their cottage, Teal Tomorrows, in 1963 for less than the price of a bicycle now, and the fourth generation of Teals & Wasses now treasure the West Clinton neighborhood.

After a period of declining health last spring, Herb’s wishes were to return to the Island to sit in the sunshine with The Boston Globe, a coffee from Tony’s, and a chocolate doughnut. He celebrated his 90th birthday with a glorious garden party and Farm Neck Cafe dinner, and enjoyed the company of his grandchildren over Columbus Day weekend, where he dispensed his wisdom and lots of Murdick’s Fudge. While not demonstrative, he adored his family, and relished his role as Grampy.

Herb is survived by his wife, Dorothy (Teal); daughters Peggy Sturdivant (Martin) of Seattle, and Gretchen Rehak (Walter) of Topsfield; and four grandchildren, Emily Sturdivant (Carlos Dobler) of Falmouth and Querétaro, Mexico; Jonah Rehak of Stamford, Conn., Sarah Rehak of Boston, and Grace Rehak of Topsfield. He is also survived by his older sister, Nancy Robertson (Kenneth) and their children, and his late sister Mary Ellen Osborne’s three daughters, all of whom were his “favorite” niece (Deborah, Betsie, and Sara). He was a father and grandfather figure and mentor to many, and so very, very loved.

The family is especially grateful to the VNA of Martha’s Vineyard, and his caregivers who became part of the family, Beth and Danielle, and to Susan N. of M.V. Hospice. A celebration of life will be held in June 2023 on-Island, where there will be an abundance of desserts and endless sunshine.

A memorial fund is being established through the Martha’s Vineyard Camp Meeting Association (MVCMA) to support the arts and community at mvcma.org (Attn.: Herbert F. Wass Memorial), or if you prefer, donations can be made to the World Central Kitchen, wck.org/ukraine-donate.