Philip Jeffrey Norton, Jr. passed away peacefully at the Martha’s Vineyard Hospital Saturday evening, November 5, surrounded by his family. He was born in Oak Bluffs on July 14, 1938 and grew up enjoying everything the Island had to offer, including fishing and hunting the waters and woods of the Vineyard. 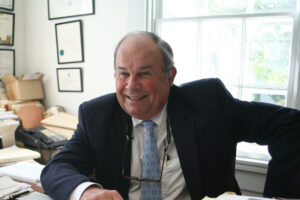 After attending the Edgartown Elementary school, he went “off-Island” and graduated high school from The Tilton School in New Hampshire. He then continued his higher education by attending Boston College for 2 years before transferring to Suffolk University in Boston, where he earned both his undergraduate and law degree. While serving as an Edgartown Police Summer Patrolman during his college and graduate school years, he met and married the love of his life, Jane Bruguiere in September, 1963. After the birth of his two sons, Jeffrey and Andrew, and while working for Hill & Barlow in Boston, he moved the family back to Martha’s Vineyard in 1970 where he eventually started his Worth & Norton law practice, and deeply involved himself in public service. He was a founding member of the Vineyard Preservation Trust, served as a Dukes County Commissioner, founded and chaired the MV chapter of Ducks Unlimited, served as chairman of the Board of Trustees for the Martha’s Vineyard Savings Bank (and previously the MV Co-Operative Bank), and was the Edgartown moderator for 43 years. He was a longtime member of the Edgartown Golf Club and served for many years on the Board of Governors. Jeff was also an honorary member of the Vineyard Golf Club and The Boathouse & Field Club.

Jeff welcomed anyone and everyone into his office to sit and chat, dispense advice only when asked, and offered a pragmatic opinion on every topic. He taught us all how to be kind to others and never had a negative word to say about anyone. As a local attorney, he often was the recipient of various forms of recognition from his clients, from freshly laid chicken eggs, baked goods, gift certificates to the Dairy Queen, and cases of Black Label beer back in the day. One of his favorite routines for many years included an early Saturday morning breakfast with his friends at Linda Jean’s Restaurant in Oak Bluffs, followed by a trip to the dump. Always a thrifty soul, he crammed as much garbage as he could into one bag to avoid the additional $5 fee for another bag. He was an avid Red Sox fan and would follow every game. If you asked him how his golf game was, he would reply, “it stinks,” but he enjoyed playing every weekend. His daily presence will be missed by everyone who knew him, and he would want everyone to know how deeply he cared about the well-being of the Island community.

The family is planning a Celebration of Life to take place in July, 2023.