With the dark, cold days of winter coming upon us, Hanukkah is a joyful celebration of light. In fact, it is referred to as the Festival of Lights because the menorah stands central to the Jewish holiday, and is steeped in family traditions.

The lighting of this special candelabra commemorates the rededication of the Second Temple in Jerusalem in 164 BCE after the victory by the Maccabeans over the oppressive forces of king Antiochus IV of Syria. According to an article written by Encyclopedia Britannica, the description of the miracle of the oil in the Temple can be found in the Talmud, which describes that while there was only a small jar of oil that had not been defiled by Antiochus, the flame miraculously burned for eight days, establishing the precedent for the length of the festival.

Hanukkah, which means “rededication” in Hebrew, is celebrated on the 25th day of the month of Kislev in the Jewish calendar and can fall anywhere from early November to late December. Each night the menorah, which recalls the Temple lampstand, is lit. This simple or elaborate candelabra has eight branches plus a holder for the shamash, or servant light that is used to light the other eight candles. One candle is illuminated on the first evening, and an additional one is lit on each subsequent night.

After the prayers when lighting the menorah, the celebration rolls into songs and gifts to youngsters often including money (Hanukkah gelt), frequently in the form of chocolate coins wrapped in gold foil. Hanukkah is a gastronomic delight, and each family has its favorites, and variations on recipes abound. A number of the traditional fare are fried, recalling the ancient miracle of the oil including latkes (potato pancakes) and sufganiyot (robust, round jelly doughnuts).

Latkes, the Yiddish word for pancakes, are perhaps the most ubiquitous Hanukkah food. Although traditionally made from fried, crisply browned, grated potatoes mixed with onion, egg, flour, and seasonings, you can find many inventive variations, including those made from sweet potato or additions such as carrots, zucchini, or apples with sugar. In a recent phone interview, Joan Nathan, who has many Jewish cookbooks to her name, offers the tip of making the latkes in the morning and putting them aside until the guests arrive when you can pop them in the oven to crisp them up. She says, “If I make them when people come, there’s too much of a mess.” There are many options for toppings, and everyone has their favorite — a dollop of applesauce or sour cream, a sprinkle of sugar, and there will be vocal advocates for just keeping them virgin.

Nicole Cabot, long-time Vineyard resident and private chef shares, “In my family, no matter where we are, we make potato latkes. I’m a traditionalist. I like an original, crispy latke with just potato and onions, which I grate into it so it’s a little subtle. My mother [Linda Vadasz] likes to make fancy, creative latkes with sweet potato and curry. We usually have both and our house smells like fried food for a week.” She continues, “The smell of latkes really comes from childhood. My grandparents, my parents, my children. we’ve all grown up with it and it’s nostalgic.”

Additionally, Cabot says another food they usually share for Hanukkah is jelly doughnuts “just to make it really healthy.” This oil-related treat is called sufganiyot, which is the Hebrew word for these plump, deep-fried jelly doughnuts topped with confectioners’ sugar. They are made with yeast and, thus, while the frying is quick, the dough takes time to rise so it’s important to plan accordingly.

While these two fried delights can be served as snacks, a succulent brisket is often the entree of choice if dinner is to be served. This beef roast was traditionally adopted for its affordability as it is a relatively inexpensive cut. When you buy the beef, look for a piece that has lots of marbling since it will make for a more tender, juicy, and flavorful dish. Many recipes call for brisket to be braised in wine or broth with carrots, potatoes, and other vegetables. In terms of spices, Nathan says, “It depends on where you’re from. I make mine in the German way; it’s not as sweet as some of the others. I put bay leaf, a little tomato, thyme so it’s more like I would do a roast, and I think it’s delicious.” Nathan suggests preparing the dish the day before. “I refrigerate it, skim off the fat, and then cut it against the grain.”

Although not exclusive to Hanukkah, there are other foods that frequently show up on the table. For instance, a common sweet or savory side dish is kugel, an Ashkenazi Jewish casserole made with broad flat egg noodles (lokshen). Sweet versions are typically made with butter, cottage cheese, eggs, sugar, and sometimes have raisins or pineapple and flavored with cinnamon. Savory versions may include garlic, onions, and other vegetables. You can always prepare one of each so everyone can choose what their palette desires.

While Hanukkah commemorates the miracle of the oil and the beauty of the light, as Cabot points out, Hanukkah is a minor Jewish festival, and you can’t equate it to Christmas. But, she adds, “It’s a lovely time of year to celebrate with family, it is a joyous time and reflective time. We have a lot of darkness at that time of year but when it comes to celebrating a festival holiday as a family — and to think about miracles — it’s a lovely time to have that happen.” 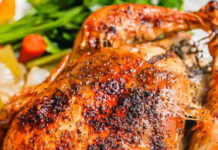