The family of Taggart Bellas Young is heartbroken to announce that on Friday, Dec. 23, 2022, his courageous 10-month engagement against cancer ended, and he passed into his next realm. During that time, Tag never conceded the struggle. 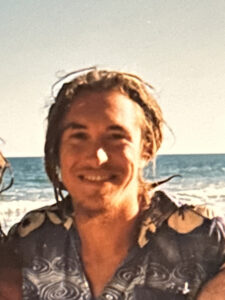 ‘Tag” was born on Jan. 27, 1981, at the Martha’s Vineyard Hospital. His childhood and early youth were spent in West Tisbury on the Island, where he attended the Island Children’s School, the West Tisbury School, and his first three years of high school at the Martha’s Vineyard Regional High School. In 1998 he moved to Florida to live with his mother for what proved to be a transformative year for him, sparking lifelong interests in philosophy and politically oppressed cultures. He graduated from the Naples High School with honors the following spring.

His many athletic abilities were evident early in his youth. He was a baseball catcher; blessed with natural golf skills, evidenced at the annual family gathering and golf tournament in Castine, Maine; an avid skier — as a youngster on occasional family trips, and as an adult developing advanced skills — his love of skiing is what later drew him to Maine. And, especially, ice hockey: He participated in the Vineyard Youth hockey program from Mite through Bantam, played in high school for the JV team his freshman year, and then for two years on the varsity, and as an adult, as his work and travel allowed, he played twice a week for a recreational adult league. He was a devoted fan of the Boston Bruins, and had a passionate love for the game, on or off the ice, all his life.

Tag also possessed innate musical talent. At an early age he learned the violin in the Suzuki program with Nancy Jephcote. In college, in a single year, he learned to play piano, and mastered it sufficiently to give a recital at the end of the school year, and in Jamaica he learned to both play and make conga drums, some of which went to Vineyard musicians.

Tag honed his clear leadership abilities in two Outward Bound hiking programs while he was still in high school on the Vineyard, then, when he was in Florida, on a third, school-sponsored, Outward Bound ocean trip. In the summer after his graduation, he was recommended by one of his teachers to play on an international hockey team organized by People to People International that took him, in his role as assistant captain, to Prague in the Czech Republic. A dislocated shoulder sent him home early, and that shoulder “list” remained with him for the rest of his life.

In April of his graduating year he had been accepted for his continuing education at his first choice, Bennington College in Vermont, but he deferred his enrollment until the fall semester of 2000, electing to spend that “gap year” in the Interim Program, which took him to Australia, where he worked with aboriginal children, and thereafter to New Zealand, Belize, Mexico, St. John, St. Thomas, and his first trip to Jamaica. While at Bennington he took another year off to travel, this time to England and France, and then back to Jamaica, establishing what proved to be a connection in and with the Rastafarian culture that became a central part of his life and character. Jamaica later became an important aspect of his family life — they visited this adopted island every year, sometimes multiple trips, his daughter Kaya from the time she was 8 months old. In the fall of 2005 he returned to Bennington, and graduated the following spring.

Tag returned to the Vineyard and his boyhood home after his travels, starting his own roofing and sidewall business, at which he excelled. In 2011 he met the love of his life, Annabella Bolotovsky. They moved to a rented house in Dedham, and bought a mountainside property and partially completed house in Rumford, Maine, 11 miles from and with a view toward Sunday River ski resort. In 2013 that house burned to the ground, and during the next nine years, Tag rebuilt on the old footprint, and largely single-handedly, a grander, three-story house that became a summer getaway for his family. He did this proudly without incurring any debt, always regarding it as his legacy to his children.

Tag was a man of many skills and extraordinary accomplishments, a devoted and loving husband and father, a loyal friend, a mentor, a leader, and an inspiration to many whose paths crossed his.

Mourning Tag’s passing are his beloved family: Anna; 8-year-old daughter Kayamina and infant son Zurian; his mother Kathleen; his father Jim; his sister Astrea; an extended family of uncles, aunts, and cousins; as well as his in-law family members; and a broad network of friends, colleagues, and acquaintances whose lives he touched in a memorable way.

A memorial gathering will be held on Saturday, Jan. 7, starting at 2 pm at the Clubhouse at 55 Broadlawn Park in Chestnut Hill. All are welcome. For those who cannot attend, there will be another gathering sometime in April at the Woods Hole Community Hall, details to be confirmed/announced.