Simply put, the Martha’s Vineyard Public Charter School’s junior high basketball team has the odds stacked against them. To start, boys’ coaches Jimmy Baird and Kenny MacDonald have a significantly smaller student body to form a team with, compared with the other primary schools on-Island; five of their 13 players are still in the fifth grade. Moreover, the Chargers don’t even have their own gym, and aren’t able to practice every day of the week right after school. Instead, they practice at the Boys & Girls Club in Edgartown, only twice a week, and after dinnertime.

Considering the circumstances, wins are inevitably less common, yet much more thrilling, for the Chargers than the average team. Coming into this past week, MVPCS’ boys team had sniffed victory twice, but were ultimately unable to secure a victory through four games. So on Thursday against the Edgartown School Eagles, the Chargers were playing with a bigger chip on their shoulders than usual.

Down 22-11 with the third quarter winding down, things were looking grim, but the Chargers refused to give up. Riding on the backs of some stellar defense, the Chargers bore down and went on a 14-4 run to bring the Eagle lead within one. Finally, with 28 seconds to go, fifth grader Jose Andrade stole the ball before the Eagles could run out the clock, and stormed down the court. Under pressure, Andrade turned and dumped the ball off to sixth grader Briggs Murphy, who had his shot blocked. In a scramble, sixth grader Brookes Keltner snagged the loose ball in the corner, and, double-teamed, swung the ball back to the top of the key. Murphy dribbled, pumped, and with 10 seconds to go, sent it to Andrade, who took no chances this time around, burying a deep two-pointer off the glass. The crowd erupted.

“Everyone was screaming,” Andrade’s mother Joanne commented following the game. In a video Andrade shared with the Times, the Charger faithful can be heard practically raising the roof from the bleachers, while the Charger bench screams and jumps with joy. Two of Andrade’s teammates began mobbing him before an Eagle timeout was even called. “For these boys to win, it’s a little bigger deal,” Coach Baird stated. “We were very excited and happy to see the effort they played [with] on both ends … it made us proud.” 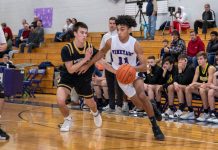 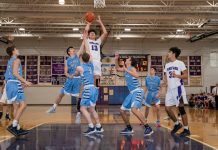