Francis Joseph Gould, 73, residing in Bethlehem, Pa., passed away on Monday, Dec. 19, 2022. He fought a relentless battle against ALS. Frank succumbed to the disease, passing peacefully with his children and wife, Deborah, at his side. 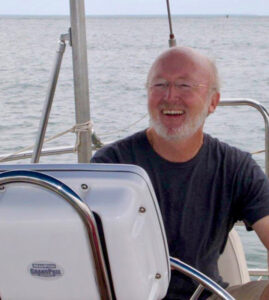 Frank was born on Oct. 28, 1949, to Joseph Anthony and Carole Loughlin Gould. Like many Philadelphia Irish Catholics, Frank came from a large family, with siblings Mary Ann, Joseph Jr., and younger brothers William (“Bill”) and Robert (“Rob”). Frank spent his youth roaming the neighborhood with Joe in search of pickup baseball games. They also fished the creeks, built and raced rickety soapbox contraptions, and embraced childhood tomfoolery. Joe recalls the brothers keeping field mice under their beds as pets, until the mice decamped to their sister’s room, to her dismay.

Upon reaching the age of 16, Frank’s father, Joe Sr., then a district manager for Acme Super Markets in Philadelphia, provided him the “courtesy” of joining the family business. It was known that as soon as a Gould reached legal age, they had a stock job at Acme.

After graduating from Holy Ghost Prep, Frank followed his brother Joe to LaSalle. The two shared the commute, living at home and continuing their labors at Acme. Frank graduated from LaSalle College with a B.A. in 1971. He enrolled at Notre Dame, earning his J.D. in 1974, finishing first in his class, together with one other student who also maintained a perfect straight-A record, which was a first at the Law School. Frank then attended New York University School of Law, and earned his tax L.L.M. in 1975.

Frank held a judicial clerkship in Doylestown, Pa., and then — clad in his signature suspenders and bowtie — accepted a position at the Appellate Division of the U.S. Department of Justice in Washington, D.C. Frank argued many cases before the U.S. Supreme Court, advocating for the people of this country. After four years with Justice, Frank was hired at Prudential in Newark, N.J., as a tax attorney. Loving the law, and committed to Continuing Legal Education (CLE) requirements to the end, Frank eventually took a business role at Pru to become head of the structured transactions group. Frank’s many innovative and lucrative investment and tax deals earned him the Chairman’s Award in 2000.

Frank met his wife, Deborah Jean Contreras, in Washington, D.C., 1976. In search of a loan for an MGB sports car, Frank walked into a credit union and saw a beautiful woman sitting inside. He immediately asked her for a date. They married on Nov. 4, 1978, at Saint Matthew’s Cathedral in D.C. Frank and Deborah moved to Lebanon, N.J., an easy commute to Newark. Not long after, the couple moved their two young children, Paige and Logan, to Yardley, Pa., where they lived for nearly 25 years in an 18th century Bucks County farmhouse. Not yet complete as a family, they had their third child, Halley, in 1990.

Though Frank would achieve much in his life, he often claimed that his children were his greatest source of pride. Frank lauded their love of learning, and celebrated each of his children as they entered the professions of education, law, and medicine.

In 1981, Deborah and Frank took a vacation that would change their lives: They visited Martha’s Vineyard. They would spend the next 38 summers on the Island — sometimes for a few weeks, and eventually for entire summers. In 1992 they purchased an old cottage on the grounds of the Martha’s Vineyard Camp Meeting Association (MVCMA). The house was a labor of love: They spent years remodeling, building, rebuilding, and annually repainting the salt-licked gingerbread. They transformed an old cottage into a splendid home, and this home became the center of their family and community life, even years after their children grew up.

After retirement, Frank focused on the preservation work of the MVCMA. He later joined the board of directors to lead efforts to rehabilitate the 1879 Tabernacle, the grounds, and resurrected Montgomery Square, where a plaque now stands recognizing his work. It was here, among the oaks and cottages, that Frank found great joy and peace.

In 2008, Frank and Deborah began a new and final adventure in Costa Rica when they purchased a mountainside house in Guanacaste. They would stay for the winter, inviting their family and friends to join them to relax at their pool, ride horses, and explore local areas and events. Frank and Deborah found dear friends and a beloved community, and the couple committed time to local volunteering.

Their adventures were cut short by the cruel progression of ALS. The disease left Frank a few years — time in Pennsylvania with his family, grandchildren, and friends. An avid baseball fan, Frank identified with Lou Gehrig, with whom he shared the disease. Gehrig’s words, spoken in 1939, attest to Frank’s own state of mind: “So I close in saying that I might have been given a bad break, but I’ve got an awful lot to live for. Thank you.”