Dr. Robert C. Sarno of Boston and Edgartown died on Jan. 7, 2023, from complications of a fall. 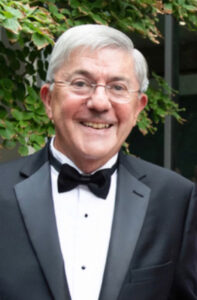 Robert was born on Dec. 6, 1945, to Roseanne Shomphe and Alfred Nicholas Sarno. He attended Archbishop Williams High School in Braintree, and graduated from Tufts University and Tufts University School of Medicine with high honors. He completed an internship in internal medicine and a residency in radiology, both at Tufts–New England Medical Center (NEMC). From 1974 to ’76, he was a staff radiology faculty member at the Massachusetts General Hospital (MGH) and Harvard Medical School. It was during the period at MGH that he met his future wife, Dr. Deborah A. Hall, then a radiology resident. They married on May 1, 1982.

In 1976, he returned as faculty to the Department of Radiology at NEMC, where he rose to professor of radiology, and remained on the faculty until his retirement.

Robert led an active professional life. He was a respected radiologist. Robert became dean of admissions after serving as a member of the Tufts School of Medicine admissions committee for 25 years. He is remembered fondly by thousands of medical students and radiology trainees, and was awarded 18 consecutive annual teaching awards by them. He served as president of the medical staff of New England Medical Center Hospitals, and was a councilor of the Massachusetts Medical Society.

As a child, he and his mother spent summers in her native Cape Breton, Canada. It was there that he learned the French language from his cousins; he remained fluent in French throughout his life.

In 1978, he and several friends purchased properties on Martha’s Vineyard. Robert, Debby, Nick, and Jane spent weekends and summer vacations there, and built a community of Island friends.

In retirement, Robert became vice president of the board of directors of the Martha’s Vineyard Hospice, and was dedicated to its mission.

His interests were eclectic. He completed the NYT daily crossword puzzle. He enjoyed Viking River Cruises, playing the harp, and writing limericks. He was an inveterate storyteller. Robert made a real effort to be all-inclusive: One of his favorite introductions of someone new to his circle was, “Please meet my new best friend!”

Robert was predeceased by his mother Roseanne (Shomphe) and father Alfred Nicholas Sarno.

He is survived by his wife, Dr. Deborah A. Hall; by son Nicholas Hall (Shauna) Sarno and grandson, William; by daughter Jane (Michael) Sullivan and grandchildren Bobby and Clara; and his sister-in-law Katherine Hall (Terry Johnson) and nephew, Benjamin (Kylee) Gurney; and by many cousins.

Robert’s life was enriched by the appearance of grandchildren: Bobby, William, and Clara and the hope for more. He also had a special relationship with his two paternal aunts, Lee and Clara, whom he cherished and cared for until their deaths. Most important to Robert was his family. His close relationship with Debby, and his concern and affection for his children and grandchildren, were evident in his day-to-day interactions. He will be missed by all who knew him.