“For God so loved the world that he gave his one and only Son, that whoever believes in him shall not perish but have eternal life.”  –John 3:16 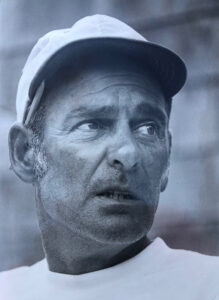 Allen was the loving and devoted husband of Judith A. Norton for 60 years, until her death in 2018, and father to his children, Melissa Norton Vincent, wife of Edward W. Vincent Jr. of Edgartown, the late Mark B. Norton of Edgartown and East Falmouth, and Rachael Norton Boone, wife of Darris Boone of Edgartown and Apex, N.C.

Allen was born on Nov. 26, 1934, at the Oak Bluffs Hospital to Mildred E. (Luce) Norton and Winthrop B. (“Sonny”) Norton. Allen was the youngest of their five children, and the first and only son. Allen was preceded in death by all four of his sisters, Natalie, Elaine, Annette, and Wilda.

Allen lived an Island boy’s life, as the family divided their time living in their cottage out at Short Point, on the waters of Jobs Neck Pond from early spring until late fall, while winters were spent at their home in Edgartown. In the early 1950s, the family moved permanently to the homestead that Sonny built on the shores of Oyster Pond. Hunting and fishing kept Dad busy, along with blueberry and huckleberry picking in season to bring over to his grandmother, where his bounty would be turned into a pie that could still bring a smile to his face. Allen graduated from Edgartown High School, and then attended Wentworth Institute of Technology in Boston. In the fall of 1954, Allen joined the Navy, and after receiving training in both Norman, Okla., and Memphis, Tenn., Allen returned to Quonset, R.I., where he was assigned to the antisubmarine aircraft carrier U.S.S. Antietam (CVS 36). The Antietam was the lead ship for “Hunter Killer Group 2,” whicho, on the 30th day of October, after making port in Rotterdam, left to join Vice Admiral Brown and his Sixth Fleet in the Mediterranean, due to the evolving crises in the Suez Canal. Allen flew with a squadron of VS 31s as a radar operator, searching for enemy subs during the Suez Canal crisis. His last duty station was Guantanamo Bay in Cuba, where he flew in B29s that towed targets for destroyer escorts to practice shooting.

While on leave in 1956, Allen met the love of his life, Judith Anne, who happened to be vacationing with her sister in Oak Bluffs. After a two-year long-distance courtship courtesy of the U.S. Navy, Allen and Judy married in 1958, just prior to Allen entering the Navy Reserve.

They made their first home together in Mullen Way, first in the bungalow built by Allen’s grandfather in the 1940s, and then the house on the corner of Mullen and Peases Point that would be home for the next 25 years. Both houses were in close proximity to the Mullen Way Shop that Allen’s grandfather, Frank L. Norton, built in the late 1900s. The shop would serve three generations of Norton Builders and two generations of Norton Architects well. Allen continued to work out of that shop up until his death.

Upon returning home from the Navy, Allen joined the Edgartown Police Department, and was a patrolman on and off for the next 10-plus years, enjoying the camaraderie as well as the hijinks that went on behind the scenes. Allen was proud to be a part of many major building and renovation projects over his lifetime. He would count the Tisbury School job in 1969, the renovation of the Edgartown Whaling Church spires and clocktower, and the Saint Andrew’s Church roof as some of his most memorable. Allen was a general contractor, builder, and architect who took great pride in everything that he built or had a hand in building. He lived by the rule “Measure twice, cut once.” When the Edgartown Police came out to ask him to evacuate from his home on Oyster Pond to a safer place in town prior to Hurricane Bob’s arrival in 1991, Allen asked them where they wanted him to go … The answer was, “The Edgartown School.” Allen answered, “I didn’t build that one, so I am staying right here,” and stay he did! Not a single shingle was missing from his roof.

If you had a chance to run into Allen, you probably heard him tell you, “Jesus loves you!” Allen loved to tell everyone he saw what he himself already knew, in hopes that if you didn’t know it yet, you too would know that Jesus loved you!

Allen would tell anyone who asked that he was a “sinner saved by grace” and that if “Jesus could take a wretch like him and turn him into a son,” he could do it for anyone! Allen’s faith brought him hope and the promise of a bright tomorrow, where “Every tear would be wiped from his eyes. There will be no more death or mourning or crying or pain, for the old order of things has passed away and he would live forever with his Savior.”  –Revelation 21:4

Allen was a worshipper and founder of Faith Community Church in Edgartown, where he helped to build what he called the Little Chapel, and in his later years was a founding member, worshipper, and prayer minister at Beacon of Hope Church in Edgartown, where he loved to dance and sing for the Lord. In recent years, he had begun sharing testimonies of how the Lord had changed his life, as he hoped it would show others that the same was possible for them.

The Norton family welcomes friends and loved ones to celebrate a life well-lived with a service to be held at noon on Saturday, Jan. 21, at Chapman Funerals and Cremations, Edgartown Road, Oak Bluffs, preceded by visiting hours with the family at 11 am. Burial will follow at the New Westside Cemetery, Edgartown.

Donations in Allen’s name may be made to Beacon of Hope Church, P.O. Box 2582, Edgartown MA, 02539, or to the Tunnel to Towers Foundation, a nonprofit organization honoring America’s first responders, veterans, and their families, either online at t2t.org or by mail to 2361 Hylan Blvd., Staten Island, NY 10306.

“Trust in the Lord with your whole heart and lean not on your own understanding, in all your ways submit to him and he will make your paths straight.”  –Proverbs 3:5-6