Thanksgiving may be behind us, but organic, Island-grown cranberries abound year-round on our shelves and in our local goodies, thanks to the Cranberry Bog Restoration Project — a Vineyard Open Land Foundation undertaking. VOLF, as it is referred to, is a tax-exempt conservation land-use planning organization founded in 1970 to preserve the rural character and natural beauty of the Island that models a harmonious combination of land preservation, agriculture, and development on a single property.

The bog, like those across southeastern Massachusetts, has ancient roots. According to the Cape Cod Cranberry Growers’ Association, tens of thousands of years ago, receding glaciers carved out cavities that evolved into cranberry bogs. When these newly formed kettle ponds filled with sand, clay, and debris, they created the perfect environment for vines to spread across the South Shore, Cape Cod, Martha’s Vineyard, and Nantucket.

Long before the colonists appeared, sasumuneash — wild cranberries, were a significant cultural and food resource for the Wampanoag people, and Cranberry day remains their most important tribal holiday. According to the tribe’s website, “Long ago, Cranberry Day included many days of harvesting and feasting … It was held in encampments on the north side of Aquinnah in Lobsterville. Many of our elders tell about … the singing and dancing that would take place after a long day of harvesting.”

Cranberries were not new to the English settlers who began arriving here in 1641, familiar as they were with European varieties that grew in southern England and in the low-lying Netherlands. According to Smithsonian Magazine, “Commercial cranberry cultivation started in the United States in 1816 when Captain Henry Hall, a Revolutionary war veteran, came across a cranberry vine thriving in some sand on Cape Cod. He became the first person to successfully cultivate cranberries. By 1885, Plymouth County boasted 1,347 acres under cultivation; Barnstable County had 2,408. By 1900, the number of acres tripled, making Cape Cod a household name.”

Bogs could be seen across the Vineyard until the 1960s and 1970s. In fact, VOLF’s bog was originally built in the 1880s, running until around 1970. At that point, then owner Manual Duarte, who had bought it in 1940 (perhaps because of a decline in the value of cranberries or the growing demand for inexpensive tourist accommodations), converted the property to a campground known as Cranberry Acres. The grounds suffered from poor management, and were closed down after his death.

VOLF came on the scene in 1982, purchasing the distressed 45 acres from Duarte’s widow. They sold seven lots and donated one to the Mary P. Wakeman Conservation Center Trust, which houses various Vineyard conservation organizations. VOLF then explored how to manage the bogs and began the restoration, which includes the preservation of 23 acres containing six acres of formerly cultivated cranberry bogs, three reservoir ponds, and upland. The project aims to serve as a demonstration facility for growing cranberries on an environmentally friendly basis; demonstrate the viability, economic and agricultural, of the bog; grow high-quality cranberries for market; and provide funds to help support VOLF. The project relies on grants, donations, the sale of its organic cranberries … and its dedicated staff and volunteers.

The initial planning and permitting stage were accomplished by early 2004. Phase two included the restoration of the bog and the water control structures to support organic growing methods. The decision to become organic came about with a trip off-Island by then trustee Ivo Meisner and Carol Magee. Magee started at VOLF in 1975, served as executive director from 1994 to 2017, and has been the cranberry bog project manager from 1994 to the present. As novices to cranberry growing, they went to study at the Cranberry Experiment Station in Wareham, run by the University of Massachusetts. There the two met Bob Keese and his wife Kristine from Plymouth, who were the first in the United States to attain organic certification, despite being assured it was impossible. VOLF ended up hiring them as consultants to help reconstruct the bog, which gained certification as organic in 2000.

With the Keeses’ help, they undertook the second phase, which included the strenuous work of clearing, sanding, replanting, and eventually installing an irrigation system. Magee says, “It was really meant to be a historic demonstration.” In 2014, they rebuilt the some 100-year-old barn to function for harvesting. By 2011, they were harvesting a few hundred pounds of Early Blacks, a heritage variety. Now with the instrumental help of Annette Anthony as well as Eugene Bergeron and his son, they have been averaging about a 2,000-pound harvest every year.

They employ the dry method, which entails pushing a machine that winnows the cranberries into baskets that are carried into the shed for processing, which takes about a month. The berries are separated from the debris and eventually go onto a conveyor belt, where up to four people hand-sort the premiums that go into bags for sale at such places as Cronig’s, Morning Glory, Ghost Island Farm, and individuals who come by. The seconds are sold in bulk to local businesses for baking, and the remainder they donate to people who, perhaps surprisingly, use them to feed their chickens.

Magee explains the growing cycle, “We put in what is called a winter flood for about a month to a month and a half that insulates the bog. You don’t want the temperature going up and down but to stay at 32 degrees or so. This protects the cranberries because they have little terminal buds, and in the winter the wind and cold can destroy your crop.” They flood the bog again from April 15 to May 15 for insect control, since this is when eggs from various insects usually hatch. When they remove the flood, it’s time for weeding, which at this point is easier because the ground is soft. By June 15 or so, the plants begin to flower — they try to stay off the bog and let nature take its course. The berries ripen in late September or October, and then it is time to harvest once again.

At its core, Cranberry Acres is a public education project to teach environmentalists, biologists, bog owners, Island students, and the general public about the feasibility of ecologically sustainable cranberry bogs that integrate protection for wetlands and organic production of cranberries. Magee shares, “If we did not have the bog, this whole area would grow into upland again. It really maintains the hydrology, and the many flora and fauna species.”

As a quintessentially Vineyard undertaking, the Cranberry Acres bog, picturesquely bordered by wetlands, open spaces, ponds, and the nearby nature trails at the Wakeman Center — one of which comes over to the bog — is a perfect stop for your Island visit.

For more information on Cranberry Acres and other Vineyard Open Land Foundation projects, or information on purchasing organic cranberries, call 508-693-3280 or office@volfmv.org. 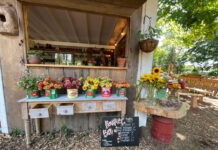 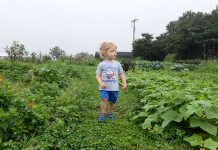 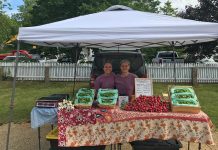