Foie gras is not exactly the new kid on the block as far as food taboos go. It was banned in Chicago in 2006, only to be overturned two years later. But the classic French delicacy is back in the news, as restaurants in California get ready to bid adieu to the dish that can elicit emotion from both sides. Lovers of it are zealous, and opponents sometimes fanatical.

Foie gras is the specifically fattened liver of a goose or duck, typically achieved by force-feeding the animal several times a day. Foie gras has been described as buttery, rich and delicate, unlike ordinary duck or goose liver.

Governor Arnold Schwarzenegger signed the statute prohibiting the sale of foie gras in the state of California in 2004; it will go into effect on July 1 of next year.

Hudson Valley Foie Gras in New York is the preeminent east-coast supplier of duck foie gras. They regularly invite chefs to visit the farm so they can feel good about serving their product and as they say, “let the duck himself show you!”

Hudson Valley calls their foie gras “luxurious and both velvety and meaty,” and they maintain that their animals are treated humanely. They are not caged, which allows them social interaction, exercise, and freedom to roam. Trained caretakers spend time caring for each animal individually, developing relationships that make hand-feeding stress free. Hudson Valley also provides medical information indicating that because of waterfowl’s unique physiology, hand-feeding is a “stress free, non-invasive procedure.”

Not so, says animal rights groups such as People for the Ethical Treatment of Animals (PETA). PETA contends that the production of foie gras is intrinsically inhumane, listing specific complaints like impaired liver function and scarring of the esophagus.

Massachusetts state senators have sponsored a bill that would prohibit the sale of foie gras in restaurants though there doesn’t appear to be a lot of momentum behind that movement right now.

Dan Sauer of 7a Foods chooses not to work with it but he doesn’t think foie gras should be outlawed either. “It isn’t any more repugnant than factory-farmed beef,” he says. People at the Huffington Post seem to agree, as they recently posted a list in their food section of eight foods that are more cruel and harmful than foie gras, including bluefin tuna, farmed salmon, feedlot cattle, and chocolate and coffee produced by child laborers.

At Atria you can have seared foie gras on the Pay Day burger, along with black truffle oil, arugula and red wine reduction ($19). If you’re on the other side of the foie gras controversy, they also have the aptly named PETA burger, marinated portabella, roasted red pepper, mozzarella, basil pesto, and oven roasted tomatoes ($15).

Chef Michael Brisson uses Hudson Valley foie gras, which he says “is a great product,” in the appetizer that folks come specifically to l’étoile for: seared and spiced duck foie gras on silky cauliflower puree with rhubarb compote ($24). Mr. Brisson’s sentiments toward the foie gras controversary are clear, “People are displacing their anger,” he says. He likens the ban to prohibition and imagines that enthusiasts will continue to enjoy it in downstairs backrooms throughout California.

l’étoile is open until the end of November and will serve Thanksgiving dinner. Check them out on November 30 for their “clean out the fridge” dinner. Cost will be around $25 and proceeds will benefit two charities: PeaceQuilts for Haiti and also toward a fund for the restaurant’s bookkeeper, Lisa Scannell, who suffered a horse-related injury this year.

Zephrus also serves foie gras on occasion on the Chef’s Tasting dish. Chef Ben deForest puts together a five-course menu for the table, which costs $68/person.

Chef Jean Dupon at Le Grenier offers Hudson Valley foie gras in a homemade sauce of reduced duck stock, port, caramelized apples, and grapes ($25). The dish is never on the menu but served nightly as a special instead. Chef Dupon says that diners have been receptive to his unique preparation. Le Grenier continues to serve dinner seven nights a week.

Year-round Vineyard diners will have a few new places to add to the going-out-to-dinner repertoire this season.

Get your pan pasta fix when you’ll want it the most, on a cold fall night. Jimmy Seas is serving garlicky deliciousness until the end of the year. Jimmy’s promises to bring the prices down in the off-season, offering discounts and specials. Another plus is, you probably won’t have to hungrily suffer through an extraordinarily long wait that is just part of the experience in the busy summer months.

As mentioned before, Atria is keeping their doors open this winter. Open Thursdays though Sundays, they will feature a condensed version of their regular menu and all their delicious burgers, which are two for one on Sundays. Dinner will primarily be served in the downstairs brick cellar, with its fireplace roaring, a big screen TV to watch, and bumper pool to play. Space upstairs will be reserved for private parties, so keep that in mind while planning your winter fiestas. 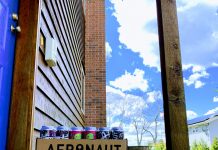