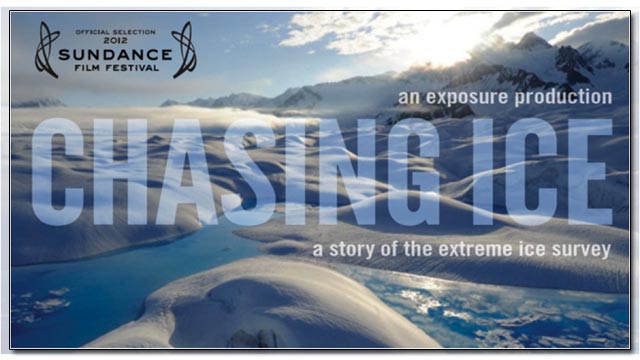 Spoiler alert: The world is coming to an end. Of course, we all knew that from the global warming predictions in Al Gore’s “An Inconvenient Truth,” but “Chasing Ice” is the icing on the bake.

The chasing is being done here by James Balog, a wildlife photographer who, 22 years ago, produced one of the most empathic and visually jarring books “capturing” animal endangerment, “Survivors.” Here he’s after bigger game – humans – and director Jeff Orlowski films Balog tracking the demise of the world’s glaciers. And it’s not a pretty death.

With a minimum of statistics and talking-head scientists, “Chasing Ice” aims for the visceral evidence that Balog feels is irrefutable that increased carbon dioxide levels are poisoning glaciers. He and his team set up some 30 cameras around the world and take time-lapse photos over several years, then string the stills into motion. “Glaciers are the canary in the global coal mine,” he says, and many people, including bottom-line executives who warily insure insurance companies against weather catastrophes, think the canary is gasping.

There’s plenty of dramtic footage. Rope-and-crampon descents are made into deep crevasses with scouring whirlpools at their bottom. Or Balog with a rope back to shore around his waist as he wades into frigid waters for ice close-ups. He’s not afraid to get his feet wet, something we all may be doing sooner rather than later.

“Chasing Ice” will be shown by the M.V. Film Festival at the Chilmark Community Center on Wed., July 18, and Thurs., July 19 at the Harbor View Hotel, Edgartown, both at 8 pm. Special guest will be Richard Houghton, senior scientist at Woods Hole Research Center. $12; $6 members. 508-645-9893; tmvff.org.

In the midst of one of the most densely populated spots on earth, New York City’s Manhattan, is a much-heralded sanctuary for humans – Central Park. What’s virtually unknown is that of the 800 species of birds in the United States and Canada, about one-third of them make Central Park at least a temporary sanctuary; about 30 species nest there.

“Birders: The Central Park Effect” is the debut directorial effort for Jeffrey Kimball, a transplanted West Coaster who joined the few, the dedicated who eschew the “New York minute” and leisurely birdwatch. The documentary reveals the extraordinary array of wild birds that grace this patch of green and the equally colorful, full-of-attitude New Yorkers who schedule their lives around the rhythms of migration.

Author Jonathan Franzen is one of them; he walked through the park “almost daily for seven years and noticed only the pigeons and sparrows.” Then a friend invited him on a birding tour.

“It was like the trees were hung with ornaments,” Mr. Franzen says. “It was one of those rare times in an adult’s life where the world suddenly seems more magical rather than less.”

Others in the eclectic group are an idiosyncratic trombone technician, a charming fashion-averse teenager, and a bird-tour leader who’s recorded every sighting she’s made since the 1940s. Featuring colorful wildlife footage with the changing seasons as backdrop, this lyrical film transports the viewer to a world that goes all but unnoticed by the 38 million people who visit America’s most famous park each year. From hummingbirds to hawks, owls, orioles, herons — whether they’re stopping on their migratory flights or claiming it as their home, these birds have a story to warble.

The knuckleball (thrown held by the fingertips) comes at the batter at about two-thirds the speed of other pitches. That’s the good news. The bad news is it’s like a butterfly that has had one too many: it weaves, bobs, dips in ways that no one can foresee, including the catcher who usually has an oversized mitt (one catcher says he was hit in the chest by the first three knuckleballs coming his way). This is because it is delivered with zero spin (hopefully), becoming subject to some pretty random physics.

This is not a pitch for the faint-hearted to count on for a paycheck. Indeed, both these pitchers have a back story (told well by directors Ricki Stern and Annie Sundberg) that includes a lot of ups and down (“Just like my pitch,” says Wakefield, who moved his family 37 times in 15 years). Dickey, when being examined for major league consideration, found he had a missing ligament in his throwing arm, which lowered his negotiating leverage considerably. Faced with a choice between a miniscule contract and an exclusionary $1 million insurance payout on a policy he had taken out on his arm in college, he follows his dream to the big leagues.

There’s a lot to root for with these two, and the “bullpen” is rounded out with some old-timers like Jim Bouton and Phil Niekro who also, as Wakefield says, “had to have the fingertips of a safecracker and the mind of a Buddhist” to make this pitch work.