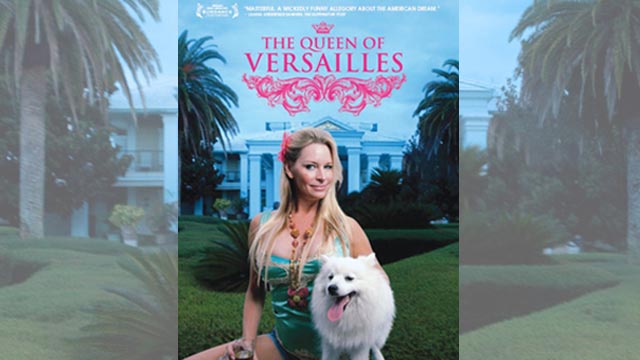 If the ultra-rich are America’s nobility, and the Occupy Wall Street movement gains a critical mass, what better touchstone for another revolution than this documentary from Lauren Greenfield, “Queen of Versailles.”

Versailles’s (the real one) Louis XVI would be David Siegel, founder of the largest privately held timeshare company in the world, Westgate Resorts. Marie Antoinette would be Jackie Siegel, his wife and a former model, mother of eight and 30 years his junior. The Siegels would live in this country’s Versailles, the largest private house here at 90,000 square feet.

Except it may not be completed. Built as a step-up from their 26,000-square-foot mansion in Orlando, Fla., the Siegels’ new house with full-size baseball field, two tennis courts, 20-car garage, 22 baths, three pools, etc., is a victim of the real estate meltdown of 2008. As David says, “this is a riches to rags story.”

Well, not quite… The rags of the rich are different from your rags and my rags, to paraphrase F. Scott Fitzgerald. And the Siegels may indeed rescue the project at the cost of losing a major Las Vegas high-rise. But it is these wild swings of fortune that make this a roller-coaster of a movie: you want to scream in glee or outrage, but scream you must.

Jackie insists they’re just living the American dream and her down-home qualities and Chicken McNuggets of wisdom somehow engender sympathy when she tells her child, “If I could afford a watch I’d tell you the time.” Take the tour.

Note: The Siegels are suing the director and distributor for defamation, and director Lauren Greenfield will attend this screening.

“A Cat in Paris”: Are nine lives enough for a double life?

From directors Jean-Loup Felicioli and Alain Gagnol comes a beautifully hand-drawn animated caper set in the shadowy alleyways of Paris.

Dino is a pet cat that leads a double life. By day he lives with Zoe, whose mother is a detective in the Parisian police force in search of the man who killed her husband. But at night Dino sneaks out the window to work with Nico, a slinky cat burglar with a big heart whose fluid movements are poetry in motion as he evades captors and flits from rooftop to rooftop.

Nominated for an Academy Award, this film is a warm and humorous love letter to classic noir films and the stylized wit of the Pink Panther cartoons, with a jazz-tinged soundtrack featuring Billie Holiday.

“Dolphin Boy”: Back in the swim of life

Morad, a teenager from a village in the north of Israel, disconnects himself from humans after the trauma of a violent attack. As a last alternative to placement in a mental hospital, he is taken by his devoted father to be treated with dolphins in Eilat. Morad begins speaking again after months of silence, but he erases his past (“seeing the dolphins around me was like the first day of my life,” he says) and refuses to return home to his awaiting mother.

Filmed over the course of four years, this documentary exposes the devastating havoc that human violence can wreak upon the human soul. “Dolphin Boy” is a compelling, award-winning film that explores the healing powers of love, friendship, and nature.

Substitute teachers always have a tough act to follow, but when your predecessor hangs herself in the classroom for her 11-year-olds to see, there’s no manual for that.

“Monsieur Lazhar” starts innocently with kids during recess: a simple errand run by one of them leads to the discovery of the popular teacher’s death. The classroom gets a quick coat of new paint and, well-meaning crisis counselor aside, that cover job sums up the school administration’s take on dealing with the children’s grief.

Enter Mr. Lazhar, a recent Algerian émigré to Canada who left his family behind to get settled first. He opportunistically presents himself as one who can fill the school’s void and is slotted in without much vetting. Not a teacher by trade, the lessons he can impart turn out to be more invaluable than book learning since his family was killed by terrorists just before they too could leave Algeria.

His fresh grief allows him to share with the kids as a mentor — and virtually a classmate — what the kids are unable to express effectively elsewhere. Simon, the boy who found the dead teacher, stifles his sense of responsibility for her death because he reported a hug from her as a kiss, which led to a reprimand. Alice, his soul mate and whose single mom as an airline pilot is rarely home, is tough as nails and not only lays out her own grief but is able to draw out Simon’s. The adult level of the relationship between Alice and Simon is wonderfully played and the school kids in toto are given a chance to be personalities in their own right.

You might not think you want to go back to summer school, but this is one classroom where you’ll learn something rewarding.