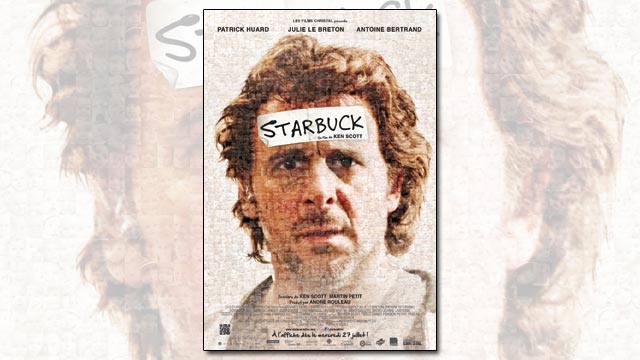 “What happens when a fertility clinic accidentally uses one donor’s sperm exclusively for two years?”

A notion like this often leads to movies getting made – from what are referred to as “high concepts,” that is, succinct and easily understood premises. (It’s one of moviedom’s many ironies that high concepts often rely on pandering to the lowest-common denominator.) Not that it can’t result in a funny movie, which it does in this case.

“Starbuck” is the anonymous nom de test tube that David (played by Patrick Huard) uses for his cash-cow donations ($35/per) at the clinic (another irony: “Starbuck” is the name of a bull famous in Canada for his manifold paternity). It turns out that David has fathered 533 children, and 142 of them are suing the clinic to find out who their anonymous donor was.

The crux of the problem is that David, when we first see him, couldn’t really be a good father to one child. In fact, his pregnant girlfriend (Julie LeBreton) is not sure she should settle down with this guy who’s currently a delivery man for his family’s butcher business. He’s also $80,000 in debt to the mob and growing pot to raise money. Oh, and his girlfriend is a police officer (but of course).

His friend (Antoine Bertrand) is the lawyer bringing the suit against the clinic, and he tries to talk David out of his harebrained scheme to connect with the children looking for him. In a sort of compromise, and to raise his girlfriend’s opinion of him, David decides to be a covert guardian angel for them, helping them in ways small to alter their lives (getting a daughter off drugs, for example).

Directed and co-written by Ken Scott, “Starbuck” was the most successful Quebec-made movie in that Canadian province in 2011.

“Starbuck” will be shown by the Martha’s Vineyard Film Festival on Wednesday, Aug. 29, at the Chilmark Community Center at 8 pm. $15; $7 for members. tmvff.org.