Cloudy skies gave way to sun as 107 runners and walkers took part Monday morning in the Pennywise Path Run to the Library, a 5K event sponsored by the Friends of the Edgartown Library.

Caleb Wright, 17, a promising high school athlete from Brooklyn, N.Y., was the overall race winner with a time of 15:27. Joe Schroeder, track coach at the Vineyard high school, provided race timing services for Monday’s event and noted that it was USTA-sanctioned, but not certified, because the length of the course was set using GPS equipment rather than more precise methods. Looking at the blistering times posted by the leading finishers, Mr. Schroeder suggested, “This course might be a little short.”

The first woman across the finish line was Erin Tiernan of Oak Bluffs, who was seventh overall with a time of 19:29. Joseph Jims of Vineyard Haven took eighth in 19:32. Erin Tiernan’s friend and running companion, Kathleen Brown of Vineyard Haven was the women’s runner-up and finished ninth in 20:39. Ryan Sawyer of Edgartown rounded out the top ten with a time of 20:45.

The course followed a route from the trailhead of Pennywise Path, at the end of North 18th Street, to the bikepath beside the Vineyard Veterinary Clinic and along the bikepath to the school. “The sand on the path was pretty deep,” Erin Tiernan said after the race, “but it was fun.”

Race winners in several categories received prizes donated by Edgartown Books, the Dairy Queen, the Boneyard, and other local businesses.

Friends of the Edgartown Library president Mary Jane Carpenter explained that the group had been planning the event since March. “Herb Foster suggested we ought to do this for the library,” she said. “Pennywise Path is such a fun place to run.”

Mr. Foster, a member of both the library trustees and the Friends organization, not only helped organize the event but took part in it. The oldest entrant in the race at age 85, he finished with a time of 48:46.

Ms. Carpenter had special thanks for all her fellow members of the Friends group, for Mr. Schroeder, and for Kathy O’Sullivan of MV Multisports, who provided both expertise and labor for this inaugural event. David and Ann Thompson provided a grant of seed money for the expenses of mounting the event and printing of tee-shirts for all the entrants. The shirts were printed from a winning design by Molly Pogue of the Edgartown School, who competed in the event with her brother and sister, Spencer and Paige.

Ms. Carpenter also thanked her husband, Glenn, and Island Transport for providing shuttle service from the school to the race start. Watching Mr. Carpenter turn his bus around at the end of 18th Street provided almost as much excitement as the scene later at the finish line.

For complete results of the race, visit http://www.coolrunning.com/results/13/ma/Sep2_PennyW_set1.shtml. 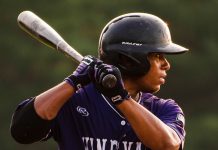