Memorial Day weekend was all you could have hoped for. Yes, there were crowds and long lines of cars, but the day was bright, beautiful, and filled with the memories of many of those people who had served our country with faith, pride, and honor.

The Oliveira family had a very proud, emotional weekend. On Friday, May 15, the Oliveira, Turner, Silvia, and Gonsalves family attended ROTC commissioning at the War Memorial Grotto at Providence College. Nicholas Gonsalves, who just the week before graduated from a 14-week training with the Coast Guard, surprised his cousins, aunts, and uncles by arriving in uniform. As was to be expected, there were lots of tears. Alicia Oliveira was pinned as a 2nd LT in the U.S. Army. She received her first salute from her father, retired TSGT David Oliveira. A military tradition is that the new officer presents the first person he or she salutes a silver dollar. Alicia presented her father a silver dollar that her now-deceased grandmother (Mildred Rocker Gonsalves) had given her at birth.

For Sunday’s ceremony, each family could only get five tickets. Mom, Dad, Lindsey, Mya, and Carly were the lucky ones. While waiting for the graduates to enter the Dunkin’ Donut Center, we watched the big screen in the middle of the center playing clips of graduates thanking their moms, dads, grandparents, etc., when suddenly Alicia’s face came on. She dedicated, danced, and sang, “You are my sunshine, my only sunshine, you make me happy when times are gray, you’ll never know, dear, how much I love you, please don’t take my sunshine away.” The crowd went wild. What a wonderful gift.

From May 29 to June 20, the Martha’s Vineyard Playhouse will be presenting the premiere of a new comedy by Arnie Reisman, Not Constantinople. This is a dark comedy is about an elderly couple who settle into the witness protection program in a gated community in Boca Raton. The husband unwittingly befriends a hit man with a contract on him. But when the husband develops Alzheimer’s, the hit man develops a conscience. Sounds like an interesting comedy; the opening night is Tuesday, June 2.

The Martha’s Vineyard Women’s Network has relaunched under a new name — Creative Entrepreneurs with Opportunities (C.E.O.) — and new leadership. They are implementing new educational programming, workshops, and events, and are gathering valuable resources for the business women and youth of our fabulous community. While they are working hard to bring you the resources you need, they would love to hear from you as well. C.E.O. is all about you, so it’s important that you know how much they really value your input! To kick off your summer, they are hosting their first NetWorkOut event and C.E.O. Power Hour on June 6. Space is limited, so get your tickets soon. Join their NetWork Out at Fit’s Possible, June 6 at noon, 1, or 2 pm. Their C.E.O Power Hour is at the Wharf Pub at 5:30 pm. You can get more information on both events at networking@iamaceo.org.

The Oak Bluffs library hosts 8mm Film Night Thursday from 6:30 to 7:30 pm. Several short films on the vintage 8mm projector include the Charlie Chaplin short In the Park, a sport parade, a Hawaiian travel film, and a boxing match between Saddler and Pep from the 1950s. Refreshments will be served.

Books and Bites, the monthly book club, is also Thursday from 12:30 to 2:30 pm. The selections are chosen by the group, and often include a video or a surprise guest. Lunch is provided courtesy of the Library Friends of Oak Bluffs.

We send birthday smiles to Charlene Barbosa and Vicki Simione on May 31, Jaime Reilly and Erika Destiny Cournoyer on June 1st, and Bert Combra on June 4. 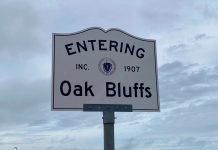