In response to the Eversource plan to spray the herbicide along the firelane of the eastern end of the Edgartown’s bike path, town selectmen Monday asked the energy company to open up the discussion, and work with its neighbors who have asked that they seek chemical-free alternatives.

According to conservation agent Jane Varkonda, federal law states that no trees can interfere with utility lines or the transmission of electricity, and trees over 15 feet need to be treated every three to five years. The Department of Conservation and Recreation used to mechanically mow the invasive vegetation, but when Eversource took over NSTAR, they took over responsibility. According to Ms. Varkonda, the equipment is no longer readily available to mow the vegetation, and the spray is the alternative to control the invasive species.

Ms. Varkonda said that much of the herbicide’s criticism stems from when the European Union misclassified Roundup as a carcinogen. “Anything can be carcinogenic if you feed enough lab rats,” she said.

Eversource uses Rodeo, which has the same main ingredient, glysphosate, as Roundup, Priscilla Ress, a spokesman for Eversource, wrote in an email.

Selectmen chairman Arthur Smadbeck asked Ms. Varkonda to clarify if spraying the chemical would be OK from a conservation standpoint. “I’m OK with a selected application of herbicides to control growth,” she responded. Ms. Varkonda also said that Eversource knows exactly where to spray, and where the rare plants are, and that the energy company would be happy to talk to the board.

In other business, the board approved several changes for local restaurants. 19 Raw requested to change its hours beginning Sept. 18 to 5 to 11 pm Monday through Thursday, noon to 12:30 am on Fridays and Saturday, and noon to 11 pm on Sundays. Rosewater Wine & Spirits will now be closed at 6 pm on Sundays, and Alchemy will be closed from Jan. 1 to Feb. 1 for maintenance and repairs. 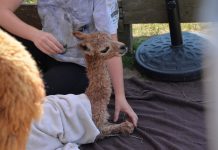