Thirza Jane Farrow died on Sept. 8, 2017, in Venice, Florida at age 91, vibrant and engaged in life to the end. A Vineyard resident for many years, Jane and her husband Ted Farrow owned Tashtego in Edgartown, a modern design and gift store fondly remembered by many as a treasure trove of gifts, kitchen supplies, antiques and more. Through Tashtego, Jane and Ted also offered interior design and architectural services and their work beautified countless homes around the Island. She will be greatly missed by her family and her many friends on the Vineyard and in Boca Grande and Venice, Florida.

Jane was born in Baltimore, Maryland, and was the eldest child of Dr. Harry D. Wilson and Thirza N. Wilson. After attending Goucher College, Jane asserted her independence by moving alone to New York City and joining the staff of Life Magazine. It was there that she met her first husband Bill Damroth. She introduced him to the Vineyard, which she had 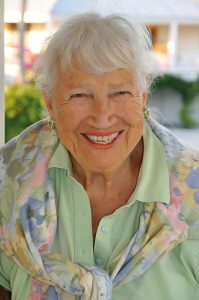 loved for years from summer visits during her childhood. As their family grew to include three sons, Jane migrated the clan from New York every summer to Sunnyside Farm on Tisbury Great Pond, owned by Millie and Phil Spalding. In the mid-1960s, Bill and Jane built a home at Abel’s Hill in Chilmark. When their marriage ended, Jane moved permanently to Abel’s Hill with her sons Peter, David and John.

Shortly afterward, she reconnected with Ted Farrow, a Vineyard friend from childhood, and they partnered in opening Tashtego. They quickly recognized each other as kindred spirits interested in the arts and travel and as romantic partners. In 1974, they wed and began a life filled with love, laughter, friends, work and travel. They particularly loved spending time each winter collecting pottery, art and artifacts in towns and villages across Europe and South America, some to sell in Tashtego and some to display in their Abel’s Hill home. Jane had an artist’s eye that she expressed both at home and in Tashtego, creating an environment full of color, cultures and contrast. For decades, she enlivened downtown Edgartown with stunningly creative window displays and worked with Ted to design graphically striking Tashtego posters that reflected their shared love of the Island. After her move to Boca Grande, Florida, in 2000, Jane kept the Vineyard in her heart, visiting often and maintaining close relationships with those she loved. This was a large contingent of people since Jane made and kept friends of all ages who all benefitted from her warmth, humor, thoughtful advice, and generosity.

Jane had a big smile, a kind heart, and a gracious spirit. She also had an adventurous streak. In her teens, on a Colorado camping trip, she shot a rattlesnake threatening her horse. In her twenties, she defied her father to move alone to New York City to start a career. In her forties, she and Ted survived a serious earthquake in Guatemala, spending days sleeping on the ground outside of unsafe buildings until they could leave. She also paddled a canoe to Nomans Land (and back!) with Ted. They both enjoyed simple beauty and shared a love of walking Island beaches and picking up shells and stones. Jane combined this love for natural beauty with an entrepreneurial spirit. A lifelong collector of beautiful stones and shells, early on she taught her sons to notice the beauty of nature and to develop the skill of close observation. When they were young, she often set them to collecting beach glass and beach stones which she polished and set into bracelets. On many occasions, her sons came home to find a cookie sheet of linked-stone bracelets resting in a warm oven to set the glue. She sold her beach stone jewelry at the farm of Millie and Harold Lewis on Old County Road in West Tisbury using the honor system and a coffee can. In Florida, she continued crafting unusual items out of shells which were wildly popular in local gift stores.

Jane will be deeply missed by her children and their partners: Peter and Amelia Damroth of Raleigh NC, David Damroth and Barbara Lee of Chilmark and Cambridge MA, and John Damroth and Trisha O’Connell of Chilmark and Watertown MA; her grandchildren and great-grandchildren, Aaron Damroth of Sarasota, FLA, Jessie Damroth and her children Logan and Ayden Nairn of West Tisbury MA, Timothy Damroth of San Francisco, and Amos Damroth of Brooklyn NY; and her two brothers Dr. Harry Wilson and Dr. Thomas Wilson. In addition, for decades at Tashtego, Jane hired, trained and served as surrogate mother to a host of summer and year-round staff. Of these, Blue Cullen and Nancy Rogers became true daughters and share this loss with her family.

When Jane lost Ted, she was greatly tested. She persevered with strength and grace through that loss and into a new life, continuing to travel and make new friends. She missed him every day, but was thankful for her life and the love they shared.  Her appreciation for the natural world never flagged. Her world view is captured in a wood carving of a scallop shell created by a close friend that she held dear, inscribed with a quote from a poem by Emma Mayhew Whiting: “Who am I that I should have the earth and sky?”