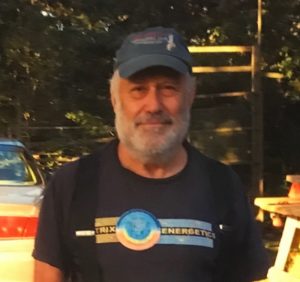 Jonathan (Jon) H. Harris, 75, of West Tisbury, died peacefully with his daughter by his side on Saturday, Feb. 17, at Mass General Hospital after an accidental fall down a staircase, which caused a traumatic brain injury.

Jon was the son of the late Hattie Harris and Sam Harris, and brother of late Susan Cell of Old Lyme, Conn.

Jon was born in Old Lyme on Oct. 10, 1942. He graduated from Brandeis University, attended Harvard School of Design, and Boston University School of Education. He moved to Martha’s Vineyard in 1970 and began teaching at the Chilmark School. He soon joined the faculty at the West Tisbury School where he was a popular, respected, and inspiring teacher for many years.

He then moved to Florida and lived on the Kashi Ashram for several years. He married Kathy Stillo in 1995 in New Jersey. They moved to Old Lyme and had a daughter, Nina, in 1997. Soon after Nina’s birth the family settled back into a home in West Tisbury, that remained Jon’s long-time residence. Over the decades, Jon was a farmer, a landlord to an amazing community of people, a tutor, a healer, a mentor, a friend, a father, an extraordinary human, and always a teacher.

Jon was an avid lover of music, with a particular fondness for piano and jazz. Whether it was in the classroom, at Windemere Nursing Home, the VFW, or Dion’s restaurant, the venue didn’t matter. It was the joy of music, playing music, and sharing music, that moved him to play.

As a teacher, Jon was a favorite of many. He taught students about community and friendship, writing and long division, learning geography through the song “Route 66,” and teaching how to heal and be in the “now.” Jon’s idea of a timeline was kids bringing in cut-out pictures of watches and clocks and putting them in a line on the wall. He was brilliant, funny, caring, insightful, and taught his students to never take life too seriously. He inter-wove music, play, math, writing, and English seamlessly. Jon made school and learning a fun experience, rather than a dreaded chore. He gave his students a safe and caring space to learn, express themselves, and explore new ideas.

Jon is survived by his beloved daughter Nina Harris, currently a student at Tulane University.

There will be a memorial service at the new Agricultural Hall on Thursday, Feb. 22, at 5 pm. Everyone is welcome to join Nina and friends for a potluck celebration of Jon’s life. There will be food, live music, and friends sharing memories of a wonderful man. Attire is casual; Jon would have loved to see everyone celebrating him in jeans.