I don’t think there is a commonly observed annual moment when one takes a whole week to make a personal assessment. There ought to be.

There may be cursory moments when one looks around at the wreckage, the disrepair, and the battered relics of a year gone by, then shrugs, and staggers on. But I don’t mean those familiar sorts of mercifully fleeting jiffys. I mean an occasion when one stares unblinkingly at the deterioration that a year has wrought on one’s plans, one’s ambitions, one’s treasury, and one’s own sorry carcass, then calculates the toll, rolls up the sleeves and puts things right, or at least as right as the natural course of things allows.

New Year’s Day is a possibility. You know, the resolutions, the sloppy sentiment, the sense that with the new year, everything’s fresh. But the track record of permanent effects resulting from resolutions made at New Year’s is poor. No one feels very well on Jan. 1, and who has the energy to make big plans when one has such a jackhammer headache?

April 15 is another possibility, but that’s all about trying to defeat the taxman, who has his own very detailed calculation of the condition you’re in, and he wants his generous piece of your action. You may not know what happened to all that money, but he does. You may not have made an unflinching analysis of your income and spending, but he has.

Now, if you happen to have a boat, big or small, there is a perfect, inescapable annual moment for assessment and repair. That moment is now — spring. It’s time to haul the boat out of the water, set it on the land where you can get in touch with all its parts, including those that are hidden most of the time, to see what wind, weather, water, tides, and your own occasionally monumental stupidity have done.

Slime, grass, and barnacles have taken hold of the bottom. The paint on the sides is cracked, and what’s worse, the errors you made the spring before in preparing the hull for painting have endured. The rouge and blush you hoped would disguise all the dings and scrapes have washed away. The varnish is utterly missing in places — many places. She looks, and you feel, a long year older.

On the other hand, if you are lucky, and at times I have been, no planks will be popping off, water won’t be rushing through the seams, and another year afloat may be assured with the application of some sandpaper, putty, paint, and varnish. And, most important, the haulout means that nothing is hidden any longer. You know where the soft spots are, where the blemishes have revealed themselves, where the accumulated dents and scratches of years announce that the old girl’s got some age on her, but with your diligent help, she’ll totter on.

And, if you’re even luckier, one of the boys you’ve grown expressly for this purpose will be on hand to scrape and sand and paint. You are reminded that it was real foresight to have fed and clothed those boys, knowing that, as the years have passed, you would accumulate some leaks and wormy parts yourself, and need their help.

Besides, getting together with one or both of the boys to do the scraping, painting, cleaning, mending, chivvying, and general boatkeeping work is pleasing beyond words. And anticipating the fun that will follow the work is pleasant too.

The chores fall into two categories. The first is demanding and very important work: You have to sand the topsides and the bottom, then paint both. You have to grease the propeller, which has these tiny set screws and tiny grease fittings that try their best to get lost. If a tiny set screw finds its way into the beach sand, it’s gone forever. No two ways about it.

Plus, almost every substance you work with is toxic to some degree, even lethal in the most extreme circumstances. During the annual haulout, your life is on the line.

Among the worst jobs is changing the engine’s four filters — one an oil filter, the other three for fuel. There’s a sequence of events that must be followed, or else the engine won’t fire off when you’re done. I’ve only rarely got the sequence right. When I screw up, then it’s a matter of draining this and bleeding that before the engine finally clatters to life, signaling the end of the tough stuff.

Back in the water, the work becomes less onerous. Bending on sail. Cleaning the smelly bilge. Cleaning the mossy woodwork. Cleaning the sink and the dishes and the toilet. Washing the towels and the settee covers that spent the winter aboard, and smell like it. But afloat again as spring becomes summer, we can set up the awning over the cockpit, so that it is cool and breezy as we work.

Still, there’s the matter of where I put all the little pieces of hardware and the specialized lines when we put the boat away in the fall. Then, I could have put my finger on each and every bronze this and Dacron that. By spring, that treasure trove of clarity has been depleted. I hunt in the cellar, the garage, and every nook on the boat. It takes more time to find the stuff when you need it than it takes to do the stuff you’re trying to do. And sometimes, besides forcing you to acknowledge your negligence, the search leads you to food you left aboard by mistake, food that’s now metastasized into a gruesome, unrecognizable, hitherto unknown life form that can’t be merely tossed out but must be scraped off the joinery. As the days stream by, the annual assessment threatens to overrun spring and cripple early summer.

Eventually it’s mostly cleaning and deciding what can be kept and what must be tossed. In a fleeting but brilliant moment a few years ago, I settled on a new strategy for keeping track of the boat’s vast and elusive inventory. I got a collection of plastic tubs and toolboxes from Shirley’s, plus a Sharpie. On the outside of each container I listed what’s in it. Sometimes there were tough decisions. Should the electrician’s tape go in the Electrical box, or should it go into a box with other kinds of tape — sail repair tape, rigging tape, mast boot tape, duct tape? Such issues often require coffee and a long period of contemplation before the most efficient outcome becomes obvious. Then there was the problem of storing all these containers, out of the way but accessible. There isn’t much storage space aboard the boat, and all the available space is curvilinear. All the containers are rectilinear. More contemplation, more coffee, and more sitting around is called for.

Such a pause often refreshes. Once, sitting around rewarded me with the memory of an occasion, years ago now, when the two boys and I went on a brief sailing cruise during the week between Christmas and New Year’s Day. It was crisp, bright, and windy, temperature in the low 30s. We cooked our meals in the pressure cooker, a small-boat culinary mainstay. We had pot roast, lots of it, and corned beef and cabbage. The steam expelled by the cooker supplemented the heating system, which is a tiny wood stove mounted on a bulkhead at the forward end of the main cabin. It heats the cabin atmosphere so that we could sit around in our shirtsleeves, telling stories and admiring our hardiness, but no heat reached the cabin floor, where frostbite conditions threatened bare feet. I recalled E.B. White, writing in “Trumpet of the Swan,” “Safety is all well and good: I prefer freedom.” Freedom and boats are entangled for me.

So, in this annual moment, or month as may be the case, even as you are consumed with preparing to sail when you should already be sailing, even though it would be splendid to get out sailing on each tender spring day, it turns out that, in its own way, it is splendid enough to haul out, to clean and reorganize, to sift through the remains of last season, to welcome memories that revisit, and to look ahead — pleased that nothing is hidden, everything is properly attended to once again.

Design Q + A: Making a great room in Harthaven 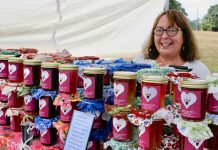