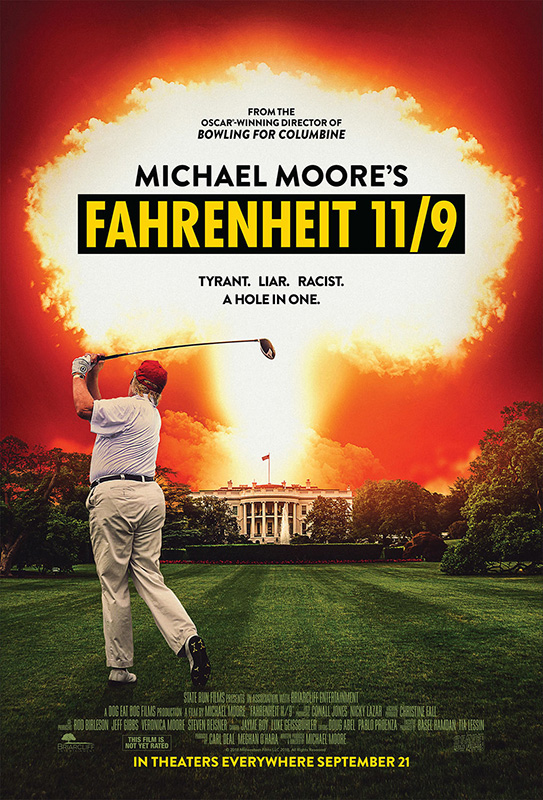 Michael Moore, documentary filmmaking’s pre-eminent gadfly, is at it again in “Fahrenheit 11/9,” which plays this weekend at the Martha’s Vineyard Film Center. This time his jeremiad attacks the Trump election and the dangers it holds for American democracy. Whatever your persuasion, it’s entertaining and not to be missed.

The film is a follow-up to Moore’s hit “Fahrenheit 9/11,” where he skewers then-President George W. Bush over the Iraq war. Who knew the Trump administration might even be worse? “Fahrenheit 11/9” opens in Philadelphia with crowds cheering at a Trump speech. Moore argues that when Trump learned Gwen Stefani had a higher salary on “The Voice” than he did on “The Apprentice,” he went on the rampage. He decided to announce he was going to run for president, mostly as a joke. The crowds and media attention made him decide to run for real.

The material that follows is familiar: Everyone thought Hillary would win; the popularity of Bernie Sanders was ignored; and guess who went on to become president? Well-edited, though, the story remains incisive in Moore’s hands. He includes interesting tidbits like the fact that Trump liked Moore’s first film, “Roger and Me,” and Trump’s son-in-law Jared Kushner thought of “Sicko” well enough to sponsor a premiere for it. He makes the point that Trump’s transgressions have always been committed in plain sight, winning over his supporters anyway. For instance, he insinuated that sex might be the reason Ivanka was his favorite child.

The film includes a large segment describing the ascent of Michigan’s governor, Rick Snyder. The governor was responsible for switching the water supply of Moore’s hometown, Flint, Mich., the most impoverished city in the nation, from clean Lake Huron to the polluted Flint River. He then ignored the overwhelming evidence that the city’s children were being sickened by lead. The analogy to Trump seems obvious.

Moore believes the American people actually have leftist beliefs, citing their desires for universal Medicare, cuts in military spending, and approval of immigration, among other policies. He points out that in the past 30 years there have been many more Democratic than Republican presidents. Not that he doesn’t skewer Obama for his appalling lack of support for Flint’s water crisis, and Clinton for his many retrograde policies. Another of Moore’s attacks is against the Democratic establishment.

Also up for attack is the Electoral College, which was passed to appease the slave states, and in the case of Trump’s election, let him win with less than a majority of the popular vote. Teachers in many states, he shows, have very little financial support, and the opioid epidemic, killing more Americans than the war in Iraq, is virtually ignored.

As in the case of his other films, Moore injects bits of optimism and humor. He illustrates how students in Parkland, Fla., have rallied against the nation’s gun policies, and teachers have gone on strike, despite lack of union support in some cases. He attempts a citizen’s arrest of Michigan’s governor, then sprays his residence with polluted water.

The film’s section on Trump’s autocratic tendencies includes horrific archival footage of Hitler’s seeming harmlessness and deceptive Nazi policies. He also points out that Trump has slyly suggested he might stay in power longer than two terms, using F.D.R. as an example, and that there has been Republican talk of postponing the 2020 election. Finally, he calls for the need to act immediately if we want to save our slender threads of democracy. That’s well put and a relief.

By the way, my picks for winner of the Manhattan Shorts are the powerful “Someone” and the a-little-grim “Fauve.” What about yours?

Information and tickets for this and other Film Center, Capawock, and Strand films are available at mvfilmsociety.com.