Heather Von Herbruck of Vineyard Haven has a favorite quote: “She never looked nice. She looked like art, and art wasn’t supposed to look nice; it was supposed to make you feel something.” –Rainbow Rowell

That thought relates to Von Herbruck’s work as well as to herself. The artist confesses that she often walks around covered in paint — on herself, on her phone, in her car, essentially everywhere. That’s clearly the price to pay when your life is your art and vice versa.

Von Herbruck’s paintings reflect her emotions, her experiences, and her mindset. The artist’s large-scale abstract works are visually stunning as well as intensely personal. Although she experiments with various styles, color, line, layering, and implied motion are hallmarks of her work.

“I love rocks,” says Von Herbruck, who admits to having amassed a huge pile of beach stones in her yard. “I love the lines on rocks. Lines represent time to me. We all live on their paths. These lines intersect. My work has a lot to do with my life as layers of paint. Sometimes it’s chipped and worn, you put another coat on top of that and go from there.”

Where she does choose to go is a mystery to the artist when she commences a new work. She says that her work is always trial and error: “For me, painting is more like a meditation to get myself into a mindframe where I can clear stuff away and put down what I’m really feeling, what’s really going on.”

There’s always a lot going on in Von Herbruck’s work, but somehow, her images always manage to coalesce into an integrated whole, somewhat like seeing both the beauty of the forest as well as the individual trees when viewing from different perspectives. This is one of the skills possessed by a talented abstract artist, like some of those Von Herbruck admires — Picasso, Rothko, Hofmann, de Kooning, Frankenthaler (whose work might be considered the closest in style to Von Herbruck’s).

Although she has been very productive in the past few years, since she picked up a paintbrush in earnestness again, Von Herbruck is not as interested in selling as in creating. She has shown in galleries in New York City, where she previously resided, and has sold work to collectors both in New York and on the Vineyard, but generally she keeps a fairly low profile as an artist.

“I’m ambivalent about showing my work,” she says. “It’s kind of like letting someone into a part of your life that’s your sanctuary — revealing a part of yourself. There’s a vulnerability.” However, Von Herbruck has been gradually exposing her artwork to the public through showings at Pathways at the Chilmark Tavern. During the month of January, the arts organization hung five large-scale paintings, and during March, Von Herbruck’s work will be featured along with paintings by Ed Schulman, Alejandro Carreno, and Whitney Cleary.

Despite her hesitation to reveal too much of herself, Von Herbruck often gives away or loans paintings to friends and admirers. She compares her process to writing in a journal. “Back in the early 2000s, I started painting just for myself,” she says. “It’s a place of meditation for me. Some people write down their emotions. I was always better at painting or cooking them.”

“I’m really a private person,” she adds. “It’s almost like taking your diary and putting something private out there in the public.”

One of the themes that Von Herbruck has explored illustrates the highly personal nature of her work. She has created a number of paintings in a series titled “Loneliness Linger,” which feature indistinct figures in murky waterlike landscapes.

“I think loneliness is actually a natural, healthy place to be,” explains the artist. “If you just accept your loneliness, it can help you to reach out to others and accept yourself. You need to be able to stand alone in a room full of people. It’s all about being OK with being lonely.”

At other times, Von Herbruck sees the humor in everyday life. This outlook is in evidence in the titles she sometimes chooses for her work. One series is called “Riddler’s Ransom,” another “Island Gossip.” A painting that represents a speeding boat is titled “Fast Crack Ferry,” based on the artist’s imagined scenario for a boat she spied out her window.

Occasionally Von Herbruck includes words or phrases in her work — often expletives. The F word is one of her favorites. She is unapologetic about her use of profanity. “‘F___ ‘ is a great word. It can mean so many different things,” she says. “I see the world through a pair of darkly comical glasses,” says the artist. “That’s how my mind works.”

That is perhaps the secret to her survival, as well as the main ingredient for an impressive body of work.

Heather Von Herbruck’s work will hang at Pathways at the Chilmark Tavern throughout March. 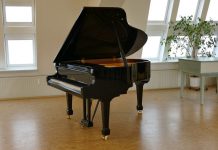