Vineyard hunters bagged a record 900 white-tailed deer last season, according to Dukes County tick biologist Dick Johnson, who found the number encouraging. Johnson said he hopes county awareness campaigns will continue to convince private landowners to permit deer hunting on their property. He credits the efficacy of hunting on private property, an extended archery season, and general deer awareness for the big deer harvest, and hopes eventually the deer taken will translate into a measurable reduction in tick-borne disease on-Island.

Johnson estimates there are at least 3,000 to 4,000 deer on the Vineyard, which on the higher end is greater than the number of year-round inhabitants in Aquinnah, Chilmark, and West Tisbury combined.

Matt Poole, Edgartown health agent and former longtime captain of the MV Tick Program, said the 900 deer figure doesn’t take into consideration vehicle deer strikes, which number over 200 per year, in addition to poaching or even licensed hunters who neglect to report what they’ve shot. Despite the number of deer subtracted from the Island population each year, Poole said given what seems supercharged fertility that Vineyard deer exhibit, he wondered if thus far there’s been any appreciable dent in the yearly population.

Long known for being reproductive hosts for black-legged ticks (Ixodes scapularis), a.k.a. deer ticks, deer are pervasive across the Vineyard alongside black-legged ticks. Curtailment of the deer population as a method for diminishing tick-borne diseases like Lyme is an ongoing strategy of the MV Tick Program, a joint initiative between the Island boards of health and Dukes County.

However, a scientific paper published last October indicates there could be more than one truth about the significance of deer in relation to ticks, and may call into question the utility of deer culling. Columbia University eco-epidemiologist Maria Diuk-Wasser, lead author of the paper, told The Times that research she and fellow scientists conducted on Block Island concluded white-tailed deer play a role in lowering the prevalence of Lyme (Borrelia burgdorferi) infection in black-legged tick nymphs.

“The blood in the deer actively kills the borrelia in the tick as it feeds,” she said. She attributed this to an “innate immunity.”

It’s commonly known that black-legged ticks feed on blood for each stage of their life cycle: larval, nymphal, and adult. Because they are so difficult to spot on a deer, Diuk-Wasser said, a theory was previously afoot that larvae and nymphs didn’t feed on deer, only adult ticks. Her work has found otherwise, she said. This doesn’t mean larvae would be cured of borrelia by dining on deer blood, University of Massachusetts tick researcher Stephen Rich wrote in an email to The Times. Rich, who wasn’t an author on the paper but is familiar with it, wrote, “Larvae don’t have borrelia unless they feed on a competent reservoir. So a larva feeding on a deer would not be cleared, because it wasn’t infected in the first place.”

“Most ticks acquire the pathogen as larvae and transmit it to new hosts as nymphs,” the paper states. “Adult [Ixodes] scapularis, however, depend mostly on deer to mate and for females to obtain a final blood meal.

“Nymphs may be infected prior to feeding on deer, and the deer blood may clear infection,” Rich wrote.

Mice are currently believed to be the primary vector of borrelia via larval and nymphal black-legged ticks. Curiously, adult black-legged ticks don’t bite mice, according to Howard Ginsberg, a U.S. Geological Survey scientist and University of Rhode Island tick researcher. Ginsberg said the adults aren’t generally found on birds either, though it was possible “they might bite big birds,” he said.

In five years of research on Fire Island, he found no adult ticks on birds, but plenty of nymphs and larvae. “There are few birds known to be competent reservoirs,” Rich wrote. “Robins (possibly some other thrushes) as well as catbirds are chief on the list.”

Tufts tick researcher Sam Telford, whose graduate research was cited in the paper, said the true extent to which birds carry borrelia is not really understood, but birds’ ability to distribute ticks to sites new and old is well known. He said a “constant rain of ticks” drops from migratory birds.

While deer do generate borrelia-free black-legged ticks, Diuk-Wasser readily acknowledged the paradox they present in being great breeding platforms for those ticks too. The last blood meal adult black-legged ticks take from deer primes them to lay their eggs. From these hatch the larvae.

How that balances out, immunization versus breeding, “all rests on how many ticks feed on deer,” Telford said. At present, he said, that’s an unknown with many variables. “We can only infer from the limited number of observations in the literature,” he said.

While a proponent of deer culls on the Vineyard, Telford said rapid decimation of the population is inadvisable, as it could trigger a borrelia spike. He advocated for measured hunting.

“Oddly enough, I’ve never seen more deer than after this hunting season,” Martha’s Vineyard Agricultural Society president Brian Athearn said. An experienced hunter, he said, “There are people terrified of Lyme disease, and rightfully so.” In his role at the Ag Society, he advocates whatever works best on-Island in terms of deer harvesting to mitigate that terror and to diminish the threat of Lyme. Speaking personally as a hunter, he said, “a target-rich environment makes it much easier to feed my family,” but tempered that idea with the reality that processing fatigue can come from an abundance of deer — he and his colleagues can only butcher so many deer, regardless of how much the season expands or how much land opens up to hunting. “Pulling the trigger is the easy part,” he said.

In an email to The Times, Kevin Esvelt, a scientist working at MIT on CRISPR mice immune to borrelia that he hopes to test-run on Nantucket, reflected on Diuk-Wasser’s findings. “It’s interesting that Diuk-Wasser’s research finds larval tick numbers on deer that are twice as high, at least on Block Island, which suggests a greater reliance on deer as larval hosts,” he wrote. “Since deer are not reservoirs, that indicates white-footed mice may be responsible for a greater fraction of infected ticks now relative to 30 years ago. If most ticks feed on either mice or deer, as this study suggests, then heritably immunizing the mice should theoretically result in many fewer infected ticks.” 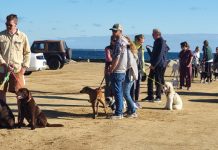