Chilmark Writing Workshop founder Nancy Aronie could not be more fulfilled than when Camp Jabberwocky campers come for their own writing workshop. I get it, because I head to Camp Jabberwocky weekly to offer Restorative Sound Journeys, and it is something I too look forward to as one of my summer highlights. Every activity offered and every counselor volunteering their time helps make summer on the Vineyard special. Reach out if you feel there’s something you want to offer as a program or activity by calling 508-693-2339 or writing to info@camjabberwocky.org.

Congratulations to Grey Barn and Farm on their 10th anniversary.

It was wonderful to see Jim Feiner Real Estate donate $2,275 to NAMI, a first-time donation for them because “it’s a great organization devoted to education and support around mental illness.” Please visit their website to learn more at nami.org.

Sig Van Raan shared that Jim Feiner revved up everyone’s mood when he opened last week’s softball game with a rousing rendition of “Take Me Out to the Ballgame” on his trombone. Cloudy morning skies gave way to sun for a great turnout of players, including many younger players, for two well-played games. Eighty-four-year-old Hans Solmmssen’s team soundly defeated Joel Bleir’s team in the first game, 12-5. The first game also featured two Kerouacs by Ed Eger. (So referenced as a Keruoac when a fly ball over right field hits “On the Road,” ie, dirt road behind right field). Plus magnificent fielding plays by younger generation players Noah Lipnick, Elijah Feiner, and Will Eger, as well as the usual “who was that guy, where did he come from plays.” A second game featured great fielding, clutch hitting, and multiple discussions on the sideline referencing Mayor Pete’s visit to M.V. on Saturday plus the usual organ recital (the older players reciting various ailments and injuries). Chilmark Softball continues all summer, come join in the fun, 8 am at Flanders Field on Pasture Road off Tabor House.

I finally stopped into Beetlebung in Menemsha and spoke to store owner John Molinari, whose parents still live in Chilmark. He started working with Island artists 15 years ago, like Eric Hawkes, Dan Waters, John Holladay, Peter Simon, and others, to create graphics that represent “Beetlebung Corner imagined as it was hundreds of years ago, West Chop/East Chop, the old Islander ferry, mermaid at South Beach, and we did our own Rorschach lobster, and then we just started doing images,” he says, pointing, “there’s Louisa Gould again.” I am fascinated by their unique greetings cards and baseball caps to their Turkish tea lights. It’s an all-in-the-family business. Molinari’s wife designs most of the clothes and mans the O.B. store, his sister Debbie also designs their clothes, and works at both stores. He does all his own logo design. All their sales are in the summer, and all the manufacturing is done in Santa Fe during the winter. He prides himself on the price point for clothes and gifts, keeping them reasonable. Stop in and be surprised.

The CCC is rocking when WMVY hosts all-ages Dance Parties on Fridays from 5 to 7pm. It’s followed by WMVY-hosted Friday night concerts from 7:30 to 9 pm, only $5. A full list of happenings at the CCC are at chilmarkcommunitycenter.org.

The M.V. Film Festival plays in Chilmark at the CCC on Monday and Wednesday at 8 pm with dinner and music beginning at 6:30 pm. Check the schedule and buy tickets at tmvff.org. Don’t forget Cinema Circus on Wednesdays from 5 to 7pm, free for all ages.

The Chilmark Flea Markets are ongoing on Wednesdays and Saturdays from 9 am to 2 pm at 142 North Rd. More info at bit.ly/ChiFlea.

Catch Vineyard Sound on Tuesdays at 7 pm at the Chilmark Community Church on Menemsha Crossroads, weekly through August 20.

On Wednesday, July 17, from 7 to 10 pm at Captain Flanders’ House, Chilmark Elmer Bliss’ former farm is transforming for a magical night under the stars. The M.V. Museum in collaboration with the M.V. Fisherman’s Preservation Trust offers an evening combining the missions of two important Island nonprofits, featuring fish printing, demonstrations, fishing history, and seafood delicacies from Island fishermen. Cap the night off on the dance floor enjoying the Sultans of Swing. Admission of $60 per person includes raw bar, food, and drink tickets. Held rain or shine. Advance reservations required, get tickets at mvmuseum.org/bliss/?blm_aid=30941.

Kara Taylor Gallery is hosting a fundraising event on Wednesday, July 17, at 6 pm with actress Amy Brenneman in support of the Leo Project, which exposes vulnerable Kenyan children to opportunities not traditionally available in the classroom, including art and art therapy, music, theater, and coding. Learn more and buy tickets at theleoproject.org/events. The Leo project was started by Jess Danforth, daughter of Chilmark artist Stephanie Danforth.

The Yard presents Yanira Castro and a company named a canary torsi in “Cast” in Thursday, July 18, and Saturday, July 20, at 7 pm. Check out the Yard’s summer creative dance and choreography program, July 22 to August 9, for children ages 6 to 11, adult dance classes, upcoming performances, and memberships for the Yard at dancetheyard.org.

The Chilmark Public Library presents a performance lecture on Tuesday, July 16, from 2 to 4 pm with artist Yanira Castro, a mash-up of the history of viewing performance with the history of audience environments in Castro’s work with the interdisciplinary group named a canary torsi. It proposes audience as citizen, and makes the case for live performance and how we “see” and participate inside it as inherently political. She will discuss two works that are being presented at Featherstone Center for the Arts and at the Yard. On Wednesday, July 17, at 5 pm, learn about the history of the Chilmark deaf community and Martha’s Vineyard sign language with Linsey Lee, Bow Van Riper, and Joan Poole Nash. Heather Sommers is exhibiting her newest work, titled “Centaur Chronicle,” 16 archival prints of politically satirical ceramic sculpture. from July 13 to August 2, with an opening reception on July 20 from 2:30 to 4:30 pm. Stories and Songs with Rizwan continues on Tuesdays and Saturdays at 10:30am. Learn more at chilmarklibrary.org. Interested in heading to the Boston MFA or any Massachusetts Trustees of Reservations property? If you have a library card, you can check out passes for reduced admission at our town library. Have a poem you’d like to record for our Local Poetry Audio Archive? Contact Marlan Sigelman at 508-645-3360 or email msigelman@clamsnet.org to set up an appointment.

If you happen to know anyone who will be in Great Britain on July 20, you may want to send them to Chilmark for their 400th anniversary celebration, with a small display about our Chilmark. 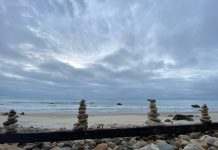 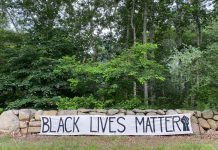 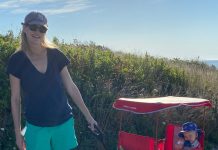 Chilmark: The art of return and restore