This column’s Brazilian Faces is Luiza Mouzinho, the Island’s first bilingual mental health counselor. I had the pleasure of meeting Luiza in the fall of 2018, as she piloted a support group for newly arrived Brazilian students at the Martha’s Vineyard Regional High School. To me, Luiza is the embodiment of service and grace, and I am grateful we crossed paths.

How old were you when you moved to the Island?
I left Brazil for Martha’s Vineyard at the age of 7. Some of my first memories are seeing a bright light coming out of the mouth of a massive ferry surrounded by darkness, bundling up with layers and layers to protect myself against the bitter cold of January, and listening to what sounded like gibberish, as classmates surrounded me in awe. I was one of the few Brazilians in the school system.

I remember being frustrated at my inability to understand other kids at school, and often wanting to be alone on the playground. I felt frustrated and worried about my inability to comprehend schoolwork. I felt embarrassed when I finally spoke up in the middle of class, only to answer incorrectly in English. I was confused about who “recess” was, and why she never came to visit our class, as it was written on the board every day. I was lucky to be comforted by kind and welcoming classmates and teachers, who often helped me with schoolwork, and a friend who held my hand as we walked down the hall to the next activity, even though we couldn’t communicate through language.

What were the aspects of Brazil that you missed? How was going back to Brazil for the first time after you had lived on the Island for a while?
I don’t remember missing much about Brazil except for my family. I lived a very sheltered life due to the dangers of Rio de Janeiro, my age, and my family’s fears. I missed the barbecues on Sundays with all my relatives, where all the cousins would get to play together. We would always get our chocolate chip ice cream, or “flocos” in Portuguese. Ice cream here didn’t taste the same. I missed my favorite cousin, Nicole. We were inseparable. Going back to Brazil, about five years later, was shocking. Reality did not align with the memories I held onto for so many years. Houses, gates, and trees were much smaller. People were bigger and older. Relationships felt distant and awkward, at least immediately. They were my family members, but they were also strangers.

What were some of the aspects of your process of going to college in the U.S.?
I loved college. I somehow managed to get into my dream school — Holy Cross. My friends helped and supported me with the essays, and my mother completed all the financial aid forms. I never received an official acceptance to Holy Cross. I assume that it must have gotten lost in the mail. I received an email inviting me to the accepted students weekend, and when I got the final confirmation of my acceptance by phone, I jumped for joy. The campus was beautiful, it was a highly regarded school, and the classroom sizes were small. I felt immensely blessed to receive a generous financial aid package and my father’s financial support; otherwise, I wouldn’t have been able to attend.

I struggled during my first semester. I was neither accustomed to nor prepared for the level of rigor and high expectations at HC. I had not attended a private high school, or received tutoring throughout my life, as many of my wealthy classmates had. Eventually, by seeking support from professors, using the resources available to me at school, and developing a greater level of discipline, I was able to excel. I am grateful for my liberal arts education, and how it has molded me into a critical thinker and opened my eyes to social justice issues.

How did you decide on a career? Did you always know you wanted to work in the field you do?
I didn’t always know I wanted to work in mental health. A confluence of factors led to my decision to study mental health counseling. I didn’t really have any direct contact with the field until I became a therapeutic mentor in 2013. Before that, I studied philosophy and peace and conflict studies in undergrad. By my senior year, I became disillusioned with academia and philosophy itself, and so I gave up on pursuing it further, even though it was one of my greatest passions. What good could I do for others who were suffering from an ivory tower?

I remember reading an article about a therapist who used philosophy in his work. He described how he assigned philosophy books as therapy homework to his clients, and how they’d go for walks in the woods to discuss life and its meaning. That sounded like something I wanted to do. I just didn’t quite know how to get there. Instead, I took a year off from school to reflect and volunteer. I didn’t have much time to reflect, as my volunteer program was pretty intense. So then I took another year off from school, and without much direction, I landed back home, as many of us who grew up on the Island often do. I found a job as a therapeutic mentor and quickly found myself working with the Brazilian community in different roles. I discovered there was an immense need for a Portuguese-speaking therapist. That’s how I found some more purpose and direction in my life.

You are a Martha’s Vineyard Vision Fellowship recipient; how does it feel to be one of the recipients?
Being a Vision fellow means many things to me. First, it means freedom from the immense burden of student loan debt. It means having the freedom to decide which career to pursue based on factors other than financial concerns. It means I am free to work in community mental health without a large financial sacrifice to myself. It means I can more easily afford to live on Martha’s Vineyard. Second, it means a connection to an inspiring and supportive fellowship community. When you become a fellow, your fellowship doesn’t end along with the completion of your degree or project, but it continues in the way of gatherings, breakfast dates, volunteering opportunities, lectures, and project collaborations.

Why did you decide to move back to the Island? How did you come to that decision?
Part of the reason I decided to return to the Island was that there was a need here that I felt a duty to fill. I am often driven by a sense of responsibility to others. I am in a unique position with my background and degree to serve the Brazilian community and to promote social justice for us by providing improved, although not yet equal, access to mental health care. This work enriches my life with greater meaning.

What are your hopes, dreams regarding your new role?
My hope is that I will not be the only Portuguese-speaking clinician on Martha’s Vineyard for very long. My dream would be to have other Brazilian clinicians with whom I could collaborate on mental health initiatives for subgroups within the Brazilian population — for example, developing strategies to build a bridge between mental health care and the Brazilian Evangelical community, support groups for Brazilian newcomers in all the different schools, etc.

Currently, I facilitate a Brazilian newcomers group for high schoolers, in which students who have just arrived from Brazil have the opportunity to share their experiences around immigration and adapting to their new environment. The students support one another in a group led by someone who speaks their language and has lived experience with immigration and the challenges of adapting to a new cultural environment. It brings me joy to be able to provide these students with this space. I wish that a support like this had existed when I and others like myself arrived here from Brazil. I hope that as time goes on, more support like this can be implemented for the Brazilian community.

How do you see your role in the community as a whole, but especially within the Brazilian community? What is the impact of working with a population that by and large know very little (at times) about mental health? How do you deal with stigmas and educate folks?
The folks that I see have already overcome stigma, just by coming to my office. I often educate people by making comparisons between mental illness and physical illness. We don’t judge someone with cancer for seeking medical treatment, and we don’t exclude people because they have diabetes. We should treat people who develop depression or anxiety, for example, with the same compassion and understanding. Mental illness is very common. Most people either have the first-hand experience of mental illness or have someone in their family or friend group with a mental illness. Some people experience depression or anxiety and aren’t aware because they don’t have a name for it, or may have a different name for it.

I explain that mental illness develops due to genetic and biological vulnerabilities and social and environmental stressors throughout a person’s life. Just as the rest of our body can get sick because of genetic vulnerabilities and different types of stressors, our brain can get sick as well. Mental illness is treatable, and we are not stuck with it for the rest of our lives. Therapy and/or medication can aid in the healing process. People who experience mental illness can still lead a worthwhile, fulfilling, and high functioning life. Education about the nature of mental illness goes a long way toward reducing stigma. 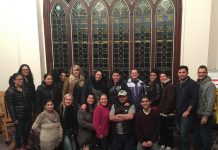