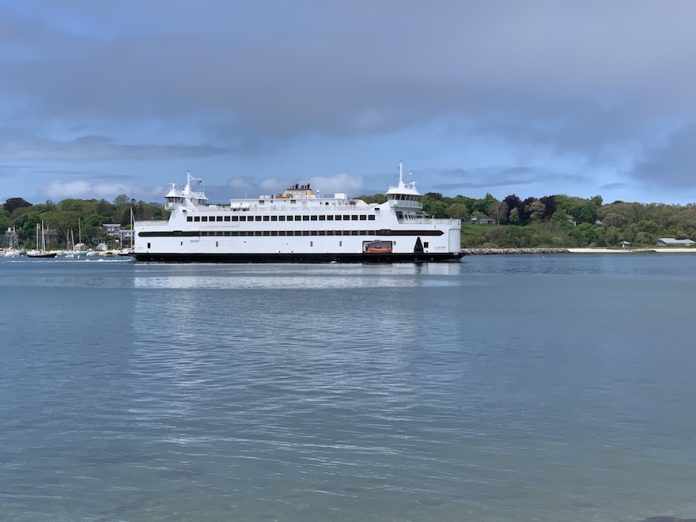 The largest ferry in the Steamship Authority fleet, the Island Home, suffered a gyrocompass failure crossing Vineyard Sound Friday morning in fog. The failure occurred during the first trip of the day from Woods Hole to Vineyard Haven, when the vessel was halfway across the sound. The ferry, which just returned to service before Memorial Day after an extended period of repairs, was sidelined for two trips.

“The crew used other instruments on board to bring the vessel safely into Vineyard Haven without incident,” SSA spokesman Sean Driscoll emailed. “The new compass was then installed by Bardwell Electronics. The compass takes several hours to stabilize upon installation, which necessitated the trip cancellation. We anticipate the vessel making its [9:30 am] departure from Vineyard Haven.”

The vessel subsequently made that scheduled trip.

A gyrocompass is a variety of compass that uses a gyroscope, as opposed to magnetic materials, to aid navigation. Driscoll noted Coast Coast Guard regulations stipulate the ferry’s gyrocompass must be operational while the vessel is underway.

“The compass was inspected this past January, and was slated to be replaced within the next year,” Driscoll wrote. “The compasses have a five- to seven-year lifespan, and this unit was approximately six years old.”

In other SSA news, the Slip 2 transfer bridge at the Vineyard Haven terminal was repaired last week, and is operational. A 20,000-pound bundle of counterweights fell from the bridge on May 9 after a cable snapped. The incident was classified as a “near miss” by OSHA standards, and briefly pinned the MV Martha’s Vineyard under the bridge ramp. Driscoll was unable to provide a figure for the repairs, but expects the subject will be addressed at a joint meeting between the board and the Port Council on Wednesday.

Updated to include what went wrong and in what conditions. –Ed.