Both the state House and Senate have agreed to hold port communities of the Steamship Authority harmless from any budget deficits at the end of this year.

Since the pandemic reached the shores of the Cape and Islands in March, demand for the ferry service has dropped considerably, and as a result, the SSA is running at a deficit. The SSA, which was established by a legislative Enabling Act in 1960, generates its revenue through fares. Through that same legislation, if the authority runs at a deficit at the end of the year, each port community has to pay to make the agency whole.

Officials have predicted the SSA could finish the year as much as $60 million in the hole, but more recently that estimate has been pegged at $22 million. Without the budget amendment, the Vineyard would be on the hook for a 35 percent share, or $7.7 million.

pandemic, and cannot afford to take on the Steamship Authority’s deficits,” Fernandes said in a press release issued Monday. “This legislation not only keeps the boats running, it keeps our towns afloat financially, and saves local residents millions of dollars. I was proud to team up with Senator Cyr and Senator Moran to get this legislation over the finish line.”

Early on, Cyr and Fernandes asked Gov. Charlie Baker to assist the port communities, which include the Vineyard, Nantucket, Barnstable, Falmouth, and New Bedford.

Fernades told The Times his office has worked with the SSA from the get-go. “As soon as this crisis hit, we were on the phone quickly with the Steamship Authority,” he said.

Senators Ed Markey and Elizabeth Warren, along with Rep. Bill Keating, have all helped the SSA explore solutions to its fiscal challenges, he said.

With respect to the amendment, he said, “this just makes it clear the port towns are not going to be on the hook.”

The enabling legislation states that if the SSA operates at a deficit, the state treasurer covers the shortfall, and has the ability to recoup the cost from the port town communities. Through the assessment, Dukes County and Nantucket would be responsible for paying 35 percent of the deficit, and the towns of Barnstable, New Bedford, and Falmouth would be liable for 10 percent each. The legislation enacted on Thursday exempts port communities from any financial responsibility for Steamship Authority deficits accrued in 2020.

A spokesperson for the Baker administration didn’t speak to the the governor’s disposition on the amendment, but acknowledged it is on his desk and under review as part of the

SSA board chair Jim Malkin lauded legislators for shepherding the amendment. “As the Vineyard member of the Steamship Authority board, I am grateful for the work Rep. Fernandes, Sen. Cyr, and Sen. Moran have put into moving this [amendment] through the legislative process,” Malkin said. “I look forward to Gov. Baker signing this bill, and assisting the Steamship Authority and the Vineyard communities that use its service in this unprecedented pandemic.”

Steamship Authority general manager Robert Davis expressed his thanks at the news. “We are extremely gratified to see progress on the amendment to the supplemental budget bill, and we again extend our thanks to our local legislative team for their ongoing support,” he wrote in a brief statement. “We stand ready to continue our positive conversations with Gov. Baker’s office of administration and finance team, to answer any questions they may have on behalf of the governor during his review of the legislation.”

At a board meeting Tuesday, Davis said for the month of May, the combined passengers for Martha’s Vineyard and Nantucket were down 68 percent, compared with 2019. Cars were down 46 percent, trucks were down 34.5 percent, and parking lot use was down “just over 83 percent,” Davis said. “Not rosy numbers, by any stretch of the imagination.”

Davis went on to note the ferry line’s net operating loss for May was $878,000, and operating income was over $5 million less than what was anticipated. Through May, he said, the overall loss to the Steamship Authority was $22 million.

Based on recent modeling, he later estimated the year-end deficit to be in the vicinity of $25 million, less than half of the $60 million estimate made earlier in the year.

Fernandes, who was not present at the meeting, said between $25 to $27 million was what he currently understood the SSA year-end liability to be.

Updated to include details from Wednesday’s SSA board meeting. 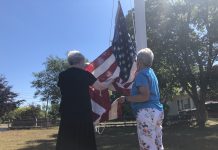