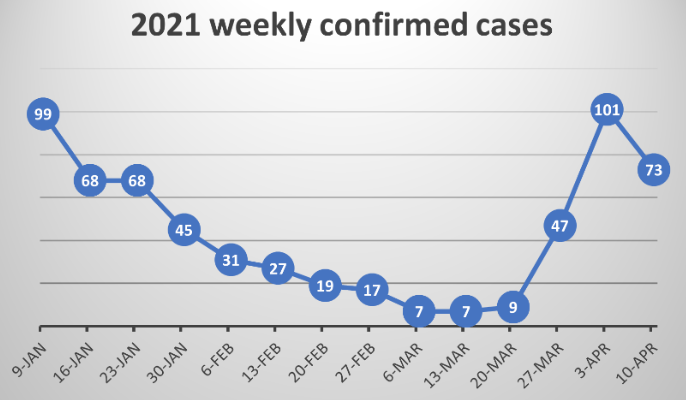 An additional 16 confirmed COVID-19 cases on Saturday brought last week’s total number of cases to 73 — 51 from the hospital, 18 at TestMV, two from school testing, and two from other providers. According to the hospital’s website, two of the individuals are hospitalized.

This comes a week after the Island reported a significant spike of 101 confirmed cases and as officials at the Martha’s Vineyard Hospital confirmed Friday the B.117 COVID variant, known as the UK variant, has been detected on the Island.

According to a report from the boards of health, of the 73 cases reported between April 4 and April 10, 54 were symptomatic. The majority of new cases were individuals 40 years old and below.

A cluster is defined as more than two people from different families or households with a shared source of infection.

Shirley’s Hardware has reopened for business with the Barn set to reopen Tuesday.

There have been 1,170 total confirmed cases on Martha’s Vineyard since testing began in March of 2020 with 416 cases or 36 percent, linked to at least one other case. Of the total cases 589 are male and 581 are female.

TestMV, which is located in the parking lot at Martha’s Vineyard Regional High School, has now administered 36,474 tests, with 308 positive results, 35,843 negative results, and 323 tests pending.

The town of Aquinnah has conducted 444 self-administered tests, of which one has come back positive, 441 negative, and two pending results.

The Martha’s Vineyard public schools have administered 10,464 tests. Of those, nine have tested positive.

The Wampanoag Tribe of Gay Head (Aquinnah) has reported a total of seven positive cases of COVID-19.