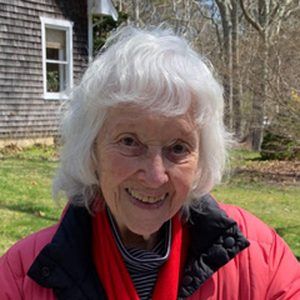 She was born to William Hugh Bonner and Nellie P. Bye on Nov. 7, 1924, in Sault Ste. Marie, Mich. Ruth graduated high school in Sault Ste. Marie in 1942, and soon after met Bill Schaffner, a Coast Guardsman stationed in the area.

She married the late William (“Bill”) Schaffner Jr. on Dec. 30, 1943. After World War II they moved to Mount Vernon, N.Y. In 1987 they moved to Martha’s Vineyard to be closer to their grandchildren.

Ruth possessed boundless energy, and was a member of the YMCA. She nurtured her giving spirit by volunteering at the Martha’s Vineyard Hospital and Windemere for more than 30 years, ringing the bell at Christmas for the Salvation Army, and at the West Tisbury Congregational Church, making wreaths and working at their festivals. She was an avid quilter and gardener.

Her ashes will be laid to rest next to her husband Bill in the Massachusetts National Cemetery in Bourne.