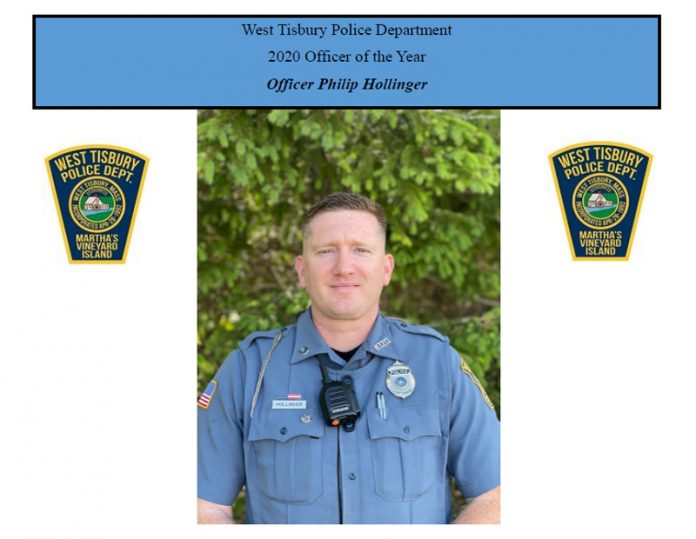 The West Tisbury Police Department has named Officer Phil Hollinger the 2020 Officer of the Year. Hollinger joined the department in 2018 and does the overnight work. Hollinger, who is 38, hails from Litchfield County, Connecticut. An avid fisherman and hunter, Hollinger has participated in the Martha’s Vineyard Striped Bass and Bluefish Derby for 15 years. He is a trained EMT with a degree in political science from St. Lawrence University.

“Even during the last year Phil was able to maintain a strong connection with the community despite the obstacles created by the pandemic,” West Tisbury Police Chief Matt Mincone said through a release. “Phil recently attended training for search and rescue as well as Joel Hardin Professional Tracking services. With this training Phil hopes to create a Search and Rescue team for the Island in the future. Officer Hollinger is currently assigned to the midnight shift, so if you are going on an early morning coffee run, pick up an extra one for him.”

Hollinger told The Times his grandfather bought into Chilmark in the 1950s and as a result, Hollinger got to spend summers on the Vineyard as a kid. As an adult, he said, he’s developed an appreciation for the Vineyard after dark.

“I dig the overnight,” he said. “You get to see the Island like most people don’t.” A particular perk, he said, is getting to see sunrises.

After working as a roofer, a carpenter, and a fishmonger, Hollinger said he was looking for more of a “team atmosphere” and found that in the West Tisbury Police Department. He describes the department as completely sold on the practice of community policing.

Hollinger attributes the progress he’s made and successes he’s had as an officer to the people he works with. “We have such a strong group of role models and leaders,” he said.