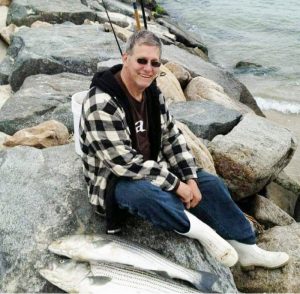 Paul grew up enjoying life on the Vineyard, and graduated from Martha’s Vineyard Regional High School. He was an avid fisherman. He and his cousin Herbie enjoyed fishing the shores. He took part in the annual Derby, always looking to catch the big one.

He worked as a drywaller and painter for Michael Ferry for many years before going out on his own. He moved to Florida in the late ’90s.

He was a social, active man who was deeply involved in his fishing hobby. He enjoyed his friends and family, who will always remember him as a good sport who loved a joke. He will be truly missed by his friends. He had a special fondness for his friend Sandy and her grandchildren; and for Cheryl, who was always there for him.

Paul is survived by his mother, Charlotte Strople, of Port Orange, Fla.; his daughter, Elizabeth Strople and husband Sean; his son, Joseph Strople; his sisters, Paula Strople, and Rosemary Strople Kieffer and husband Timothy; brothers Arthur Strople III, and Donald Wager and wife Georgette. He was preceded in death by his father, Arthur Strople; his brother, Leonard Strople; and his niece, Jennifer Colligan Kuehne.

The family would like to thank Hospice of Port Orange. The nurses took such wonderful care of him.

A celebration of life will be held at a later date.