Terry Iadicicco Lowe, 58, passed away peacefully at home on Friday, Oct. 1, 2021, after a long battle with breast cancer, holding the hand of the love of her life, her husband Tim, and with her loving, devoted daughter Josie by her side. 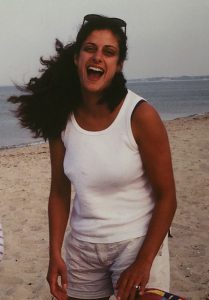 Terry was most proud of her daughter, her self-proclaimed greatest joy and accomplishment.

She had an unparalleled passion and enjoyment for her work, too; always excited, looking forward to another day of new challenges as practice manager and veterinary technician at Animal Health Care Associates. Her lifelong affection and avocation for animals made this position her perfect niche.

Terry most appreciated and enjoyed experiencing the culture of food, travel, and music; she loved to dance. She cherished her strong and close relationship with her family and friends, friends who became family.

Born and raised in Philadelphia, her strong family ties to the Vineyard provided summer seasons during her adolescence and early adult years. After moving to New York City and having Josie, she decided to give up city life for a new start on the Vineyard. She met Tim at the Campground in 1999; they enjoyed a great life together for 21 years.

In addition to Josie and Tim, Terry is survived by her mother, Constance (“Connie”) Iadicicco; her brother, Jeffery, his wife Christina (“Chrissy”), and children, Bobby, Jackie, and her boyfriend Zane Smith, in Raleigh. Terry always made it clear that one of the gifts of her and Tim’s union was gaining another family in Tim’s family — Craig and Edie Lowe, Nancy and Claude Casey; nephew Matt and niece Maria Lowe, who comfortingly opened their home during care and treatment trips to Boston; nephew Andy Lowe and his girlfriend Maggie; Damon Cleveland and family, and Mason Gayles and family. Terry also cherished her New York and Philly “families”; her tribe of friends extended near and far through her infectious spirit.

Terry asked that in lieu of flowers, donations be made to Hospice & Palliative Care of Martha’s Vineyard, P.O. Box 1748, Vineyard Haven, MA 02568, or to Mass General Hospital Cancer Center, to aid in their continued world-class care and research.