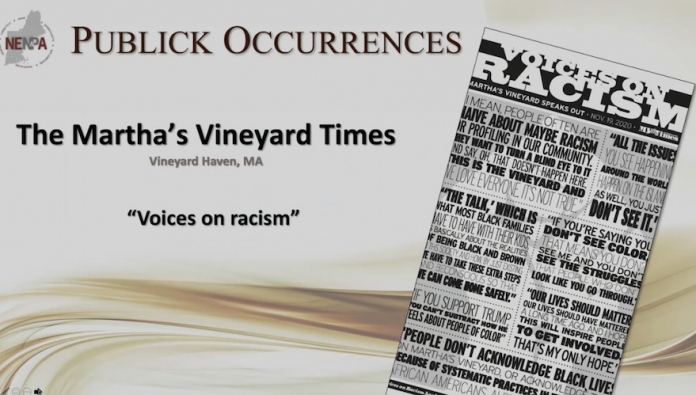 The Martha’s Vineyard Times was the recipient of a Publick Occurrences award for its “Voices on Racism” section. The award was presented by the New England Newspaper and Press Association Thursday.

The Times was one of 16 newspapers across New England recognized for outstanding journalism.

“Voices on Racism” was a project organized by former Times intern Kyra Steck with assistance from the rest of The Times editorial staff and production team.

“By gathering a collection of oral histories from community members of color on their experiences with prejudice, bias, and racism, this project opened up meaningful dialogue in the community,” the judges said. “This section was pure eloquence … and a true public service.”

During Friday’s awards ceremony, The Times was named a Distinguished Newspaper in the Newspaper of the Year contest. It’s the fifth year in a row that the newspaper has reached the finals in the contest.