John F. Connors Jr. died peacefully in his sleep on the morning of Dec. 25, 2021, at his home in Edgartown, with his wife by his side. Born on June 21, 1936, to John (“Jack”) and Dorothy Connors, John was raised in Syracuse, N.Y. He was a former resident of Southboro, Boston, Sanibel, Fla., and San Francisco. 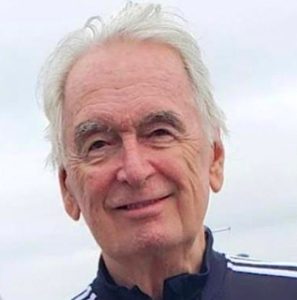 John graduated from the Cathedral School in 1953, and the Manlius Military School in 1954, where he was a gifted student and a standout in both baseball and basketball. He continued his athletic and academic career at St. Bonaventure University. John was a four-year member of the varsity basketball team, his career culminating with back-to-back appearances in the NIT Final Four, a designation as captain and team MVP, and a top-20 national team ranking during his senior year. Four of his rebounding performances still rank among the highest in school history, including his 23 rebounds against Iona College in Madison Square Garden. John was inducted into the Saint Bonaventure Athletics Hall of Fame in 1998.

Following graduation with honors from St. Bonaventure in 1958, John married the love of his life, the former Carolyn L. Byrnes of Syracuse, at Blessed Sacrament. They would go on to have five children, and build a beautiful life together.

John served out his military commitment to the Army, stationed at Fort Sill in Oklahoma and Fort Devens, and departing as a second lieutenant in 1961.

His business career began in the training program with General Electric in Syracuse, focusing on the then-emerging telecommunications industry. In 1966, John received his master’s in business from Oklahoma City University, graduating with top honors and receiving the Most Outstanding Student award.

With a strong belief that “no one makes it alone” in life, John was a lifelong champion of social and civil right causes and Democratic politics. He joined the St. Bonaventure University board of trustees in 2000 and — while he served in that capacity — John and Carolyn founded the Robert C. Conroy Memorial Internship, an ecumenical program encouraging SBU students to explore issues relating to peace, individual faith, and social justice.

John also served on the board of the St. Francis House of Boston, the largest day shelter in Massachusetts, where he founded and supported the Carolyn L. Connors Women’s Center. John and Carolyn received an honorary award at the St. Francis House’s All the Way Home event, recognizing their commitment to rebuilding lives.

John and Carolyn were avid supporters of Martha’s Vineyard Community Services and its annual Possible Dreams auction, at times making headlines with their generous bids on such items as an in-home performance by Carly Simon.

John was a friend to all. He proudly hosted political fundraising events for members of the Senate and Congress, including John Lewis and many others. He enjoyed being a moderator for the Sanibel Island “Current Events” series, and engaging with his friends at Dot’s Diner and its infamous “Think Tank” gatherings on Saturday mornings. However, John’s favorite place to hold court was around his Edgartown dining room table, visited by hundreds of summer guests over the years, and often inspiring spirited political discussions — and even a few changed minds.

John and his wife were well-known bicyclists, and enjoyed biking into their later years, logging thousands of miles on bike paths around the world.