Darren Lobdell died peacefully in his sleep on Dec. 26, 2021, at Martha’s Vineyard Hospital, surrounded by family and friends. The cause of death was complications from a stroke. 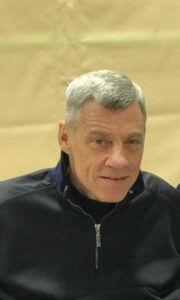 He was born on May 17, 1965, in New Britain, Conn., to Virginia (“Ginny”) Lobdell (Addicott) and Jim Lobdell. He moved with his family to the Vineyard in 1970, and graduated from Martha’s Vineyard Regional High School in 1983. After getting his undergraduate degree from UMass Amherst, he got his MBA from Harvard Business School as a member of the class of 1996.

Throughout his life, Darren always had a large group of devoted friends. The house he built on Stoney Hill Road in Vineyard Haven was a favorite gathering place, especially on Sunday afternoons, when Patriots fans would come together to eat, drink, and cheer on their team.

During his high school years, Darren was an honors student, a star athlete, and a theater performer. He earned the role of starting quarterback on the varsity football team as a freshman, was captain of the varsity basketball team, and also lettered in track and soccer. He was a standout choral singer and actor, performing in productions such as “Li’l Abner” and “Harvey.” Throughout his childhood, he enjoyed sailing with his family along the coast of New England on their schooner, Malabar II. In later years he was an avid deep-sea fisherman.

A car accident at the age of 18 left him a quadriplegic, and changed the course of his life. Instead of attending Kings Point Merchant Marine Academy and becoming a ship’s captain, he went to business school, and became an extremely successful trader in the financial services industry. As a trader, he led large teams at some of the most prominent firms in the country — and was known as bold and fearless.

Darren’s attitude and drive following his accident are a source of inspiration and hope. He viewed his situation as both a challenge and an opportunity. Those closest to him will tell you that he never complained, despite the obstacles he faced. Instead of looking back, he always looked forward to the future.

Darren will be remembered for his loyalty as a friend, his generosity of spirit, and his dry sense of humor. You could always count on Darren for his unpretentious honesty — he never put on airs, and was always direct and sincere. He will be missed by so many on and off the Island.

Darren is survived by his mother Ginny; father Jim; and sister Kristin. Darren was the favorite uncle to Kristin’s five children, Michael, Felicia, James, Dale, and Katherine. He is also survived by his uncles Steve and Ken, their wives Debby and Karen, and his Aunt Pat, along with their families.

A celebration of life will be held for Darren in the spring.