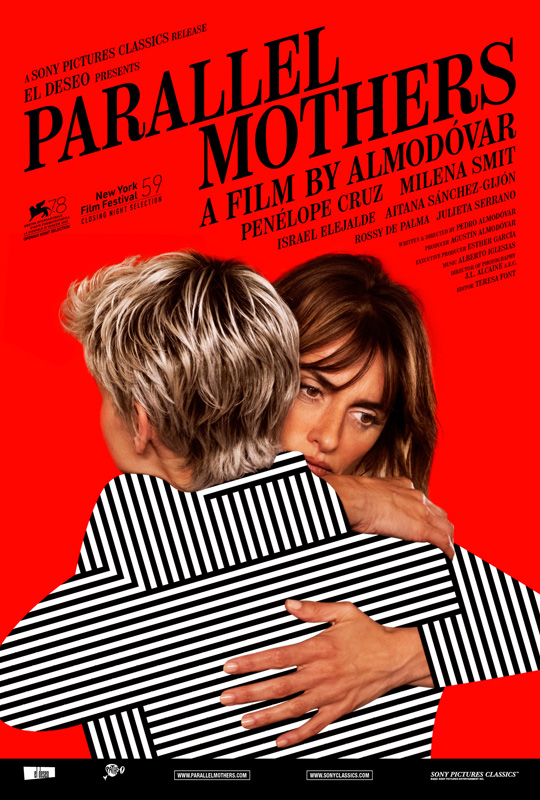 “Parallel Mothers,” a new film by Pedro Almodóvar, opens on Friday, Jan. 28, at the M.V. Film Center in Vineyard Haven. The Spanish director Almodóvar is an internationally celebrated filmmaker, and “Parallel Mothers” is this two-time Oscar winner’s 22nd film. It brings Oscar winner Penelope Cruz and Almodóvar together for their seventh film.

In yet another Almodóvar film about women and motherhood, Cruz plays Janis, a middle-aged fashion photographer, with Milena Smit as Ana, a teenager with a less-than-devoted mother, Teresa (Aitana Sanchez-Gijón), with a would-be acting career. Another of the director’s regular actors, Rossy de Palma, plays Janis’ editor. After Janis (named after Janis Joplin) photographs forensic archaeologist Arturo (Israel Elejalde), she asks him if he’ll be willing to excavate the mass grave where her great-grandfather was killed and buried at the outbreak of the Spanish Civil War. Arturo tells her he must seek approval from the foundation he works for. In this way, Almodóvar brings in a historical allusion that keeps the film’s narrative from becoming simply a typically and vividly colorful melodrama with elaborate plotting.

Janis and Arturo have a brief fling, ending once Arturo, who is married, says he must look after his wife, who is undergoing cancer treatment. When Janis discovers she’s pregnant, she assumes it’s by Arturo, but she is happy to be a single mother without him. When Janis goes into labor, she shares a room with Ana, who is also in labor and frightened, and Janis looks after her in the motherly fashion of a 40-year-old. From there, Almodóvar involves the viewers in a typically intricate and compelling story.

The two women form a friendship based on their single-mother status and their parenting of two female babies. Arturo insists, however, that he is not the father of Janis’ baby, so Janis undergoes genetic testing to see if Arturo is indeed Cecilia’s father. Lo and behold, she learns she is not the baby’s biological mother. It dawns on her that the babies have been switched in the hospital, but she doesn’t tell Ana.

Ana’s baby, Anita, dies from sudden infant death syndrome, and Janis discovers Ana, who has left her mother’s house, working in a coffee shop. She offers Ana a job as a live-in maid, caring for Janis’ baby. In the meantime, Ana reveals that she was raped by a gang of her classmates.

Arturo returns, telling Janis the foundation has approved the excavation of her great-grandfather’s grave. His wife has recovered, and the two have separated, so he and Janis celebrate, while Ana is jealous. When Janis finally confesses the truth about Cecilia, Ana leaves that night with the baby.

The film finally returns to the excavation. In this way, Almodóvar elevates what might seem to be a soap opera about two women that is full of coincidences to a story with historical and political depth.

Further information and tickets for “Parallel Mothers” are available at mvfilmsociety.com. For information about films playing at Edgartown Cinemas, visit entertainmentcinemas.com/locations/edgartown/.