The Island boards of health lifted the Island’s indoor mask mandate, following a vote from each board during a joint meeting Wednesday, but businesses will still have a choice to enact their own mask requirements.

The suspension went into effect immediately, following separate votes from each Island board of health during a Zoom meeting that had more than 150 participants. Island schools, which are on vacation this week, had lifted their mask requirements based on the vote of the Island health boards. That means when students return on Monday, they’ll be returning to classrooms where they won’t be required to wear masks.

Masks are still required by federal mandate on public transportation at least through March 18. Masking is also still required as part of the Massachusetts Department of Public Health isolation and quarantine guidance.

The boards of health vote did leave the door open to reinstate the mask mandate should case numbers rise, and reach high-risk categories outlined by the Centers for Disease Control.

Chilmark board of health member and Edgartown health agent Matt Poole said the Island would look at reinstating its mask mandate if Dukes County becomes high-risk. Risk levels for the Island are based on whether there are more than or fewer than 41 cases in a seven-day period, and how many hospitalizations there have been in that period.

The Island has not reported any new cases in the past three days. The Island’s seven-day PCR test case total as of Tuesday is 10 cases.

Tisbury health agent Maura Valley said they are working with the Martha’s Vineyard Commission on population numbers for the summer.

Valley said the Island boards of health are working on a way to keep up-to-date information on seven-day case rates and hospitalizations available online, but the information can be found on the CDC website.

Edgartown board of health member Meegan Lancaster said the mask mandate is tied to CDC guidance, allowing for businesses to decide if they would like people to mask or not. “If certain enterprises want to be more restrictive, they can be more restrictive,” she said.

A decision to lift the mandate on Saturday, after collecting more off-Island data about case numbers, was discarded, and the boards instead decided to institute the lifted mandate immediately.

Despite having the mandate lifted, several members of the public were still critical of the boards of health decision to follow CDC guidelines.

Kim Murphy said the board of health no longer has the power to tell Americans what they can do with their bodies.

“If masks were so widely used, why did the virus escalate so quickly?” she said. “There is no evidence at this time the mandate reduced the spread. Regardless, we are Americans and we have the freedom to choose. Don’t add any law, or mandate, or whatever, that says, ‘We’ll make it an option.’ This is America, we are free. It’s time to end.”

Lara Maciel said masks were ridiculous, and she hasn’t worn a mask in the past six months: “It’s time to lift the mandate.”

Keith Bassett said Island constituents voted for the health board members, not the CDC. “I don’t understand why you all seem to worship the CDC and everything they are putting out,” Bassett said. “As leaders, I’m really hoping you’ll start to look at other information and real science, not from the CDC.”

Several speakers praised the Island boards of health for instituting the mask mandates in the first place. “Thank you to this board. You have made tremendous decisions over the past two years, and you have kept us safe,” Oak Bluffs library director Allyson Malik said.

The Island boards of health voted in November to continue an indoor mask mandate on the Vineyard to ensure COVID cases did not rise during the holiday season. Dr. Michael Stoto, an epidemiologist and professor at Georgetown University, and Dr. Henry Neider, who practices family medicine in Oak Bluffs, were brought in at the time to present facts about COVID to the audience.

Following that decision, there was a sharp rise in COVID cases, with the highest count of 490 new cases in January, as the omicron variant raged across the country. The Island also had several hospitalizations, and its first death attributed to COVID. However, in recent weeks Island cases have plummeted. The Martha’s Vineyard boards of health reported 30 new cases of COVID-19 last week, a two-case rise from the previous week, but still a sharp decrease from the number of cases the Island was seeing a month earlier.

Of the new cases, five were reported from the Martha’s Vineyard Hospital, three from TestMV, six from other PCR tests, and 16 from over-the-counter and antigen tests.

Health officials are monitoring seven of the new cases, and 23 are no longer being followed. There were 22 symptomatic cases, four with no symptoms, and four with unknown symptoms.

The new cases consisted of 13 people with booster shots, 12 with either two Moderna or Pfizer shots or one Johnson & Johnson shot, and five unvaccinated. 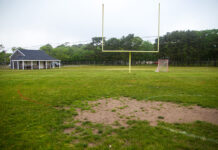