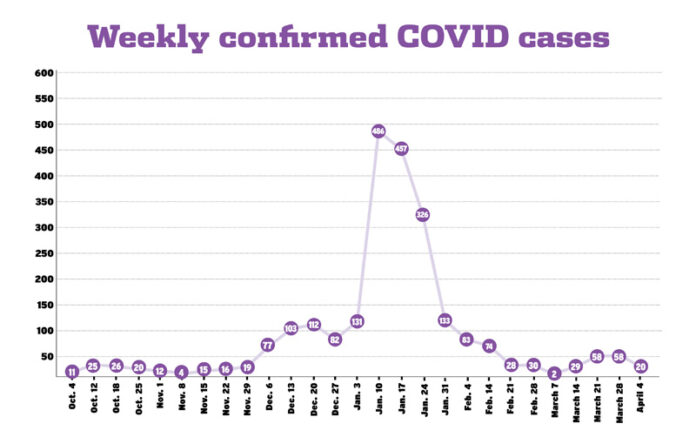 Typically March goes out like a lamb when it comes to the weather, but the same can be said of COVID-19.

After two straight weeks of 58 cases of COVID-19 in mid-March, the number of positive test results dropped to 20 cases last week — 11 PCR tests, and 9 OTC. There were no hospitalizations, and the Island remains at low risk for community spread, according to the weekly report issued by the Island boards of health. Despite the reduced risk, the Island boards of health have asked Islanders to remain vigilant when they either test positive or are exposed to COVID.

Of the 20 positive results, 17 were symptomatic, 2 were asymptomatic, and 1 was unknown. The majority of those who tested positive had received their booster shots (14), four completed their first series, and two were unvaccinated.

The drop in cases is one of the reasons that TestMV has shut down its independent testing site for asymptomatic individuals.

So far this week, the case counts are up slightly, with 19 reported.

Meanwhile, Martha’s Vineyard Hospital is now offering second boosters (fourth doses) of the COVID-19 vaccine to those with certain medical conditions and anyone over the age of 50, according to an email sent by hospital spokeswoman Marissa Lefebvre. Individuals also must have received their first booster (third dose) at least four months ago to be eligible for another mRNA (Pfizer or Moderna) booster.