Ah, September! College students and summer help are melting away; goldenrod glorifies; Labor Day nears; the Derby bell rings. These punctuate the 10 weeks of Island summer. It has become an endurance race: too much.

Gardens will soon be entering the cut-downs phase, maybe with relief, since heat and drought have inhibited rebloom. Perennial clumps should be cut back: thinking phlox, alchemilla, daylilies, or any plant developing browned leaves as summer wears on. Dry conditions plus high humidity is the recipe for foliar problems; I can picture at least one clump of mildewy phlox I shall be very happy to cut down! Fresh, young leaves sprout, and give a sense of order to replace the passé foliage mass.

Many roses respond to side-dressing, watering, and pruning now, producing fresh leaves and flowers. Keeping vitex deadheaded may extend bloom well into fall. Deadhead browned oakleaf hydrangea flowerheads, but refrain from deadheading older mophead hydrangea cultivars, such as ‘Nikko Blue’; cut these in spring. Recently introduced mopheads such as ‘Endless Summer,’ ‘Bloomstruck,’ and ‘Summer Crush’ bloom on new wood; these can be deadheaded after summer blooming.

Some lepidopteran and hymenopteran species of butterfly, bee, and wasp overwinter in stems, stalks, nooks, and crannies of debris. With respect to garden allies and garden cleanup, being less compulsive, rather than more, is an ecological plus.

Some gardeners go much further. The Sakonnet Garden owners, in Little Compton, R.I., experimented with creating an imaginative pollinator hotel out of recycled material that became a piece of garden art into the bargain.

Items on the to-do list now for 2023 gardens: soil care, ordering and planting bulbs of all descriptions (including garlic), dividing perennials, cleanup of workspaces.

Plan to make more compost and solve disposal in one stroke. There is never enough! After stuffing one of the large compost tumblers with everything we could think of, once it was cooked there was barely enough to cover just one row of asparagus (asparagus, however showing signs of appreciation).

Maybe even tool care! Every tool deserves maintenance, but the availability of well -made tools constantly shrinks: Older is almost invariably better and sturdier. Every packet of extra/unused seed deserves careful, airtight, dry storage. The price of seeds increases yearly, and sometimes all one needs is less than a dozen of something. Save seeds too; they make great gifts.

Almost two and a half inches in the rain gauge! The August 26 thunderstorm came just in the nick of time; this period of drought has been severe. Nonetheless, despite all that rain, digging into unimproved soil, I found dry earth one inch down. Here is the National Weather Service drought statement: bit.ly/NWSondrought.

Trees, rainfall: Everything is connected

It was regrettable to read here that a woman’s recent attempt to protect a tree was subjected to sniggering and ridicule.

‘The world’s rivers are drying up from extreme weather’

This CNN article (cnn.it/3TrtMNV) describes, with maps, the drastic shrinking of six rivers due to lack of rainfall: the Colorado; the Yangtze; the Rhine; the Po; the Loire; and the Danube. As an example of impacts on commerce alone, shipping restrictions on water-starved European rivers are the potential equivalent of shutting down the U.S. Interstate system. Moreover, as important as commerce is, water in these river systems is life, in even more basic ways.

The failure to connect the dots is astonishing. We know humans often overexploit natural resources to survive and profit in the short term, while neglecting long-term sustainability, but:

In just the past 50 years, one-third of tropical rainforests have vanished globally, due to their destruction for commodity production (soy, beef, palm oil, pulping, lumber).

Why is this important? How is drought in higher latitudes caused, as these six river systems indicate, when it is so distant from tropical rainforests?

Everything is connected. The water cycle, rain’s source, is an integral part of the carbon cycle. Where is rain produced? Over deciduous hardwood forests primarily, which transpire carbon dioxide, oxygen, and moisture.

Does anyone stop to think about what the consequences are of destruction of forests, especially the equatorial ones, that drive and supply much of the global water cycle?

Trees produce flows of water vapor that are typically more than 10 times greater than from herbaceous vegetation per unit of land area, surpassing those produced by wet ground or open water. Transpiration is an active biological process that is not fully reflected in the debate about climate change.

In the transpiration process, trees extract water from the soil, store it, and then release it back into the atmosphere. It is carried around the globe in circulation patterns caused by Earth’s rotation. One of the significant outcomes of mass deforestation is a drying of the land and aridity, for both biological and atmospheric water-content reasons.

Cutting down of forest eliminates the water released back into the air, thus reduces cloud formation, and thus reduces rainfall. These areas often become arid. They lack plant life to support the environmental cycle that is necessary for balance of rain to earth to trees to atmosphere, instead of supplying the atmospheric rivers that deliver rain to drying higher latitudes.

Garden Notes: Watch for deer on the roads 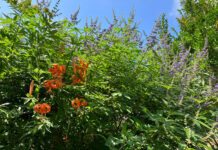