Two Beacon Hill lawmakers are calling for an investigation into what they’ve called a “political stunt” that brought nearly 50 migrants and refugees to Martha’s Vineyard last week.

In a letter to U.S. Attorney General Merrick Garland, state Sen. Julian Cyr, D-Truro, and state Rep. Dylan Fernandes, D-Falmouth, who have been integrally involved in the Island’s response, have called on Garland to investigate the actions of Florida Gov. Ron DeSantis, who hired private charter planes to bring the migrants and refugees from San Antonio, Texas, to Martha’s Vineyard on the promise of housing, jobs, and an expedited immigration path.

“As legislators representing Martha’s Vineyard, we have had the opportunity to meet with a number of these individuals,” the letter to Garland states. “After hearing their accounts, we are deeply concerned with the circumstances leading to their transport to Martha’s Vineyard. They report that they were enticed by a woman in San Antonio with false promises of housing, work, and expedited immigration assistance immediately upon their arrival.”

DeSantis has said publicly that the migrants signed documents to voluntarily fly to the Island, but the migrants and those who worked closely have repeatedly said they thought they were headed for Boston.

The letter from Cyr and Fernandes goes on to state that they were given varying information about their destinations. “No one we spoke with knew they were being flown to Martha’s Vineyard,” the letter states. “Individuals also conveyed to us the deep fear and confusion they experienced when they ultimately landed on Martha’s Vineyard to discover they were in a place they had never heard of, surrounded by water.”

Because the migrants had started the immigration process in Texas seeking asylum and their departure put them in jeopardy of being in violation of immigration laws, “we believe these and other reported actions intended to mislead these asylum seekers, violate their rights, and derail ongoing immigration proceedings,” they wrote. “We respectfully, yet urgently request that your office open an investigation regarding the conduct of all those involved. Given the gravity of the situation and the potential for perpetrators to repeat their action, we ask that the Department of Justice swiftly investigate these circumstances so that those responsible are held fully accountable for all legal violations.”

DeSantis and other Republicans have vowed to send more migrants to the Vineyard and other locations in blue states.

The letter from Cyr and Fernandes is just the latest one calling for a federal investigation. Immigration attorneys representing the migrants have also called for the DOJ to investigate. Federal officials have declined to comment on whether they will pursue an investigation. An email to Garland’s office was not immediately returned.

Meanwhile, a Texas sheriff has opened up his own investigation into the woman, identified as “Perla” by the migrants, who allegedly lured them to a hotel and ultimately onto the planes with the false promises of jobs and housing.

A class action suit has also been filed in U.S. District Court.

As The Times reported on Thursday, at least two of the migrants have left the Cape and Islands, and are no longer at Joint Base Cape Cod. A third individual left from Martha’s Vineyard, Fernandes said.

On Thursday, Housing Assistance Corp. (HAC) announced that it would provide assistance to the migrants and refugees.

In a press release, the Hyannis-based nonprofit announced it would help them navigate the shelter system and connect with resources through the Housing Response Fund and volunteer coordination effort.
“This is a tool for our staff to respond to humanitarian crises as they arise, focusing on people in transition, whether that be immigration-based, due to domestic violence, or homelessness,” Alisa Magnotta, CEO of Housing Assistance, said in the release.

According to the release, Housing Assistance has been working with migrants while they’re at Joint Base Cape Cod. “Whether their next step is going into shelter elsewhere in the state or connecting with friends or relatives elsewhere in the country, regardless of the reason behind a humanitarian need, we respond, and we help people figure out next steps with dignity,” Magnotta said in the release.

According to the release, Housing Assistance also helped individuals who were moved to the military base after being displaced by Hurricane Katrina in 2005. The agency has also helped with Afghan and Haitian refugees.
In addition to the fund, Housing Assistance is coordinating translators and other volunteers. The agency has received numerous calls from people in the community who wish to help. Those wishing to support the Housing Response Fund & Volunteer Coordination may do so by donating at haconcapecod.org/humanitarian. Interested volunteers can email volunteer@haconcapecod.org, particularly native Spanish speakers and those willing to drive migrants to appointments on and/or off the Cape, including Boston. 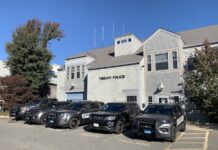 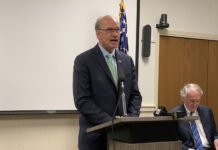 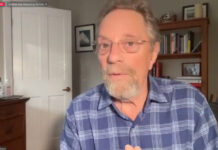 ‘It’s not entirely up to me’

‘It’s not entirely up to me’