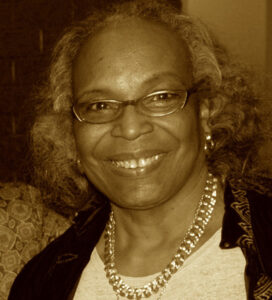 Sandra was born in Atlanta, Ga., in March 1938, the only child of Hubert and Armaka Carmichael. She was raised in Boston, where her family moved when she was 3 years old. Educated in the public schools of Boston, she attended Girls Latin High, and graduated from the Jeremiah Burke High School. After attending Hunter College in New York City for a short time, she returned to Boston during the height of the civil rights era to work as a secretary for the Boston branch of the NAACP, and later for the American Friends Service Committee.

She married Richard Bayne in June 1965 in Boston, and the couple soon moved to Washington, D.C., with her son Bijan. There, while she continued to work for the American Friends Service Committee, their son Javan was born in March 1966.

In 1975, Sandra received a bachelor’s degree in zoology. In 1977, she earned her master’s degree in clinical psychology, both from Howard University.

After completing a practicum at Boston City Hospital, Sandra worked as a clinical psychotherapist for the Cambridge Guidance Center in Cambridge from 1978 to 1983. During the administration of President Bill Clinton, she served as a specialist and stress counselor to employees at the White House. She continued her clinical career in Washington, D.C., working for law enforcement departments and juvenile counseling services. During these years, in addition to doing volunteer work for the Jones Haywood School of Ballet, she also worked as the entertainment critic of the Metro Chronicle.

In the latter part of her career, Sandra maintained a small private practice, and provided guidance and tutelage to young aspiring psychotherapists. Sandra closed out her professional career serving as an itinerant school psychotherapist for the D.C. Public School System, obituaryretiring in 2005.

In her free time, in addition to enjoying cuisine from all over the world, and traveling in Europe, Peru, and Mexico with friends, she was a longtime theatergoer, music and movie lover, avid reader of mystery novels, and dollhouse collector and builder. She enjoyed vacations on Martha’s Vineyard, where she spent time with close family and friends for nearly 60 years. Her sense of humor, love of conversation, fashion sense, and intellectual curiosity will always be remembered by loved ones.

She is survived by her husband Richard, son Bijan, and her dear, devoted friend Kathy Haughee, as well as several loving relatives. She was predeceased by her son Javan E. Bayne.

A graveside service will be held Saturday, Nov. 5, at Oak Grove Cemetery, Oak Bluffs, at 2 pm. Following the service, there will be a celebration of her life at the Holy Ghost Society Hall, 137 Vineyard Ave., Oak Bluffs.