As a kid, I had astonishing vision. I can remember standing in our driveway and seeing with perfect clarity a wrought-iron filigree on a mailbox post 200 yards up the road. As a young birder, I enjoyed watching birds through binoculars but rarely bothered raising my binocs just for identification: My unaided eyes usually showed enough detail for an instant ID, even at what I’d now consider unbelievable distances.

One day, as a 24-year-old grad student, I was in the Park Street subway station in Boston and noticed that an illuminated destination sign at the end of the platform had a halo around it. Within a year or two, a renewed driver’s license came with the formerly unthinkable “corrective lenses” restriction. Today, at age 64, I’m as near-sighted as a worm: I can focus sharply on objects eight inches from my eyes, but anything beyond arm’s length is just a blob. And increasingly, the whole picture dims as my lenses grow cloudy and more and more “floaters” populate my field of vision.

My ears have fared a bit better. Despite thousands of hours spent with a violin yowling under my left ear, my high-frequency hearing is basically hanging in there. I can still hear the call notes of brown creepers and golden-crowned kinglets, though these notes don’t sound as loud as they once did, and I’m surely missing ones that, decades ago, I would have picked up. Similar bird calls that I once distinguished automatically — say, the chip notes of palm and yellow-rumped warblers — sound ambiguous more and more often, and I expect that when I finally do settle on an ID, I’m wrong with increasing frequency.

Naturalists depend on their senses. I’m not exactly ancient, and I’ve been lucky enough to retain a good percentage of the sensory acuity I once had — probably more than most people my age. Yet, inexorably, the world is fading. What does it mean to be a naturalist of a certain age, with the wildlife I love to study gradually getting more elusive?

For one thing, I’m grateful that technology is on our side. I’m an eyeglasses wearer, never having gotten to the point where I could imagine pasting anything to my eyeball. But, while my eyeglasses are inconvenient in the field, especially for photography – Off! On! Off! On! Oh, blast, where are they? — brilliant work by Rhonda at Visual As Specs produced a set of lenses that reversed decades of decline.

Things are still a bit cloudy and speckled, distant objects are still a bit blurred, and I lose a bit of close focus when wearing them. But objects at the distances that matter most to me look tolerably sharp and natural. And there remains the prospect of more stringent interventions when they’re needed: Cataract surgery and that thing where a laser sizzles off some of your eyeball have grown into routine, almost minor, and are reportedly very effective last resorts.

And while I haven’t yet explored the option, hearing aid technology seems to have progressed dramatically in recent decades. One birder friend of mine, formerly deaf as a fencepost, acquired hearing aids and suddenly began detecting stuff before I did. The change was as dramatic as it was welcome, and gave me hope for my own future as a birder.

These mechanical fixes, while miraculous, don’t and probably can’t completely compensate even for the moderate deterioration I’ve experienced. And of course the deficiency will only get worse with time. But I’ve found that even as my senses themselves slide downhill, my mind finds ways to compensate: as the hardware declines, the software improves.

That distant hawk afloat on a thermal over there? I can’t see the color of its tail, and even the shape and posture of its wings are not quite clear. And yet, I guarantee you, it’s a red-tailed hawk. Somehow, specifics emerge from the blur I’m seeing, combine with a huge database of previous observations, and pop out as a confident (and still, I believe, usually correct) identification.

Even more importantly, my changing senses have redirected my attention in highly profitable ways. With the mid- to long-range world getting sketchy, I turned my attention to smaller and closer objects. The world of insects proves to be an incredibly rich, diverse, and wonderful realm. The silver lining of declining vision has been the discovery of an entire new world around me, ready to be explored.

If I could get back the senses of my 15-year-old self, of course I would. And yes, I’m old enough to grasp in a very personal way that things only go in one direction from here.

But in the meantime, technological fixes and accumulating experience are helping me hold up my end in the field. And limitations, paradoxically, have led to liberating new discoveries. I’ve been lucky so far, and if my luck holds, I’ve got some good years left. The main effect of getting older has been increased determination to adapt as well as I can and put my remaining time to good use. 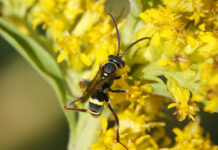 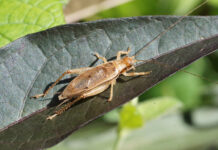 Wild Side: Survival of the fittest