A Stagecoach Taxi driver who was caught driving with a 2-year-old child on his lap has had his license to operate in Edgartown revoked.

The issue came up at Monday’s meeting of the Edgartown board of selectmen. Police Chief David Rossi began the meeting by reading a letter from attorney Robert Moriarty on behalf of his client, Martin Janevski. On Monday, July 17, Mr. Janevski drove a taxi down Main Street with a 2-year-old child sitting on his lap, and informed the child’s parent that “we do this all the time.” He was charged with reckless endangerment to a child, among other citations, and his taxi license was revoked, according to police.

Mr. Janevski chose to waive his right to contest the revocation, and by taking this action, he will not be able to apply for another taxicab license until May 1, 2018, Chief Rossi said. “Martin has asked me to inform you that he tremendously regrets his actions from July 17, and he apologizes,” Chief Rossi said, reading from the letter.

The board agreed that there was nothing to vote on because Mr. Janevski had not disputed the police department’s actions.

As the selectmen awaited an Eversource representative who was stuck in traffic — can’t imagine why — Selectman Michael Donaroma invited Edgartown resident Carol Fligor to address the board.

Ms. Fligor has lived downtown for 53 years with few complaints, she said. This past June pushed her limits, and the noise became too much, she told the board.

Ms. Filgor joined a group called Citizens Against Loud Music, and they called to be on the board’s agenda. Ms. Fligor was “terribly upset” to read in an MV Times article that loud music was on the board’s July 17 agenda — a day that Ms. Fligor said she repeatedly said she didn’t want because it was “too late” in the season. She also told selectmen she was out of town.

A week earlier, representatives of Atlantic restaurant were at the meeting, but left when it became clear that the person raising the complaints was not in attendance.

On Monday, Ms. Fligor read aloud a letter, expressing her disappointment, noting that she felt deeply hurt after watching the meeting on MVTV, where her side of the argument was not represented.

Board members agreed to review her letter, and address it at a later date.

In other business, the board approved a custodial contract for town hall. The board received one bid from Action Cleaning Services at $25 per hour, starting in 2018. Selectman Margaret Serpa accepted the bid and authorized Mr. Donaroma to sign as acting chairman. Chairman Arthur Smadbeck was absent.

With the Eversource representative before them, the board approved moving one pole on Fuller Street, and moving another one down the street so it doesn’t block a home on the street. The 35-foot poles are being replaced by poles 45 feet tall to handle heavier equipment and new technology. The board also approved an under-the-road hand hole on 7th Street that won’t extend onto privately owned property. 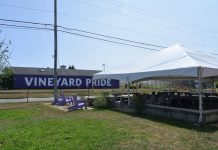 Island settles into school during COVID

Wish I was on the island...need some good open air live music !!!

Wish i had known about this! Is there a schedule somewhere...

Island settles into school during COVID