Martha’s Vineyard once ran on coal.

“We didn’t have any electricity,” recalled Stan Lair (1902-1987) about his Vineyard Haven childhood in a 1980 interview. “For heat, we had stoves — parlor stoves — and a kitchen range which burnt coal; coal and wood. … My first job was [to] take out ashes for old widow women and bring in coal.”

Our steamers ran on coal, too. They required several tons of coal each day to operate.

At the turn of the 20th century, the Vineyard Haven waterfront was crowded with coal barges and the tugs that hauled them. Water Street, where Bass Creek had once connected the harbor to the Lagoon during colonial times, was piled on both sides with massive heaps of coal.

On one end of the block, where the Steamship Authority ticket office now stands, stood the old St. Croix Oliver store, later a lunch room (and behind it, the celebrated Seamen’s Bethel). At the other end of the street, at what is now Five Corners, was LeGrand Lockwood Aldrich’s concrete garage (later the Dukes County Garage), which still stands today. In the middle, where the Steamship parking lot and staging area is, was Frank Tilton’s lumber yard. It was a working waterfront.

Lorraine Kornek, who lived across the street in the 30s and 40s, writes, “I remember the Tilton Lumber Yard. My brother and I used to jump from one stack to another. Next to that was a coal yard owned by Crowells. One day, my brother Georgie was playing in the coal yard and came home covered with coal dust. My mother sent him to the beach with a bar of soap to get cleaned up! Which was right there.”

Between Tilton’s and the garage, where the Black Dog Bakery stands today (a building which earlier housed everything from the telephone company trucks and Carol Brush’s cheese shop to C.B. Stark’s first jewelry store), was a flat, empty lot. “A mudhole,” recalled Lair. “The duck pond. That’s where I learned to skate. Crowell’s Pond,” joked Ralph Look in response.

Between Tilton’s and the lunch room, there were two side-by-side coal dealers: Clarence Cleveland and Ben Crowell.

The larger and more successful of the two belonged to Benjamin Crowell (1879-1948) and was known as Crowell Coal. (The way the old-timers pronounced it, the words rhymed.) Begun before his birth by his father, the business lasted well after Crowell’s death.

The late Basil Welch recalled in a 1981 interview, “Benny Crowell, the coal yard. Right. ‘Santa Claus,’ we called him. He had a long white flowing beard, hung halfway down to his belt. He ran the coal yard there for years and he was a big man. It always amazed me when he talked, because he had a very high-pitched voice. [You’d] say ‘Hi, Mr. Crowell.’ [He’d say] ‘Good mornin’!’ – way up high! You never expected a voice like that out of a man his size. He always wore a black hat, black overcoat, black pants, and black galoshes on. Never saw him without.”

The old St. Croix Oliver store was moved south to become the Crowell Coal office in 1947 (the same year the Luxemoor Leather Factory was moved to Five Corners to become the building that now houses the Golden Bull restaurant and other businesses). Crowell’s partner, who also served as the “weigher” at the coal office, was his brother-in-law Thomas Mosher. (Mosher’s son Philip would become proprietor of the well-known photo-finishing shop known as Mosher Photo.)

Next door was the smaller coal operation owned by Clarence Cleveland (1852-1920). A Vineyard Haven native and the son of a Hatch Road boatbuilder, Cleveland was a former fisherman. He sold coal, hay, and straw from the office and coal yard on a narrow lot across from the SBS grain store, from soon after the turn of the 20th century until shortly before his death in 1920. His wife Sarah was a former teacher, presumably at one of the Tisbury schools.

Among Cleveland’s longtime employees was teamster Brad Manchester (1846-1924), who carted coal with his white horse. Manchester was reportedly one of the founders of the Barnacle Club, and later worked for the town, trimming the granite sidewalk curbing with his hammer and chisel before concrete curbings became standard.

The two coal businesses eventually merged; Cleveland’s small operation was absorbed by Crowell’s sizable enterprise. “Coal was a big thing then,” recalled Lair. “Of course, there wasn’t that much oil around. When oil started to come in and became popular, why, the coal yards went out of business.” Crowell Coal survived into the late 1960s.

In the end, Crowell’s office was demolished, but Cleveland’s survived. In the mid 1970s, when Tilton Lumber and adjoining properties were sold to the Steamship Authority, the old office building was moved behind the Black Dog Bakery. Joe Hall, who became manager of the Black Dog in 1979, recalled, “We just used the ‘coal office’ for storage. Then in the late 1980s it became the initial home of our catalog and mail order department when we first started to ship T-shirts, coffee mugs, cookies and dog bones all over the world. In the early 1990s, I got permission to move the coal office to the north side of the lot for better visibility and rebuild it as the original Black Dog General Store. I hired Dana Hodsdon to do the work. We decided we couldn’t keep the chimney, unfortunately. We kept the same dimensions though but added the front porch, steps, and ramp.” 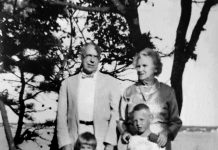 Of mink and Mink Meadows 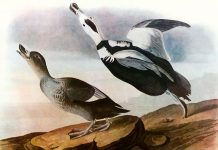 This Was Then: The Island’s lost birds 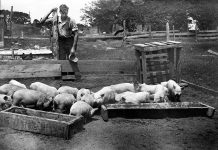 This Was Then: Pig tales